The Apple Bites Back 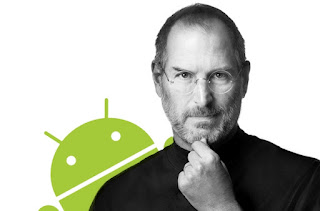 I remember when Apple first introduced the iPhone in 2007.  How can anyone forget?  Steve Jobs stood there dressed in his iconic blue jeans and turtleneck with what looked like a prop straight out of Star Trek – but this was far from being science fiction. It was unlike anything anyone had ever seen before.  It was seductive with its sleek, curved edges.  Its screen was incredibly vibrant, nearly covering the entire face of the device.

Yes it was a device – far more than just the cell phone it was designed to be.  It was…art and I wanted it…bad.  Since then the iPhone has taken the cellular industry by storm and has advanced it immeasurably in the past 5 years.  It set the industry standard and became the juggernaut that it is today – with Apple having sold more iPhones in five years than it has sold Macs in the past 28 years.

I admit I’m a bit of a technophile perhaps a borderline tech geek – so sue me.  I probably shouldn’t say that and give anyone an idea.  It seems to be the way business in America – if you still have a business – is done these days.  If you didn’t build it, then I guess the next best thing you can do is sue it – especially if that business is your main competitor and you can claim they’re culpable of copyright infringement.

That’s exactly what Apple did when it sued Samsung in April of 2011 and just a few days ago won that lawsuit with a landmark decision when that jury determined that Samsung “was guilty of patent infringement time and time again on many devices spanning many carriers”.  The jury then slapped Samsung with a fine of over a billion dollars.

Apple has since filed notices with the courts as to which devices they now want banned from being sold in the U.S.  Here’s the list:

And just the other day Apple included Samsung’s newest flagship the Galaxy SIII, the Galaxy Note and the Galaxy Note 10.1.  Keep in mind this is separate from the first decision that was rendered by the jury, so in essence, the lawsuits continue perhaps in perpetuity.  According to the website Engadget, at issue here are some of Apple's utility patents that it says Samsung has infringed upon. The headliner patents at issue are '721 which covers slide to unlock, and '604, which could apply to the universal search feature Samsung has been pulling from its phones recently. Another familiar entry is the '647 patent Apple slapped HTC with in 2010, which has a vague description but applies to clicking on a phone number in an email, for example, to call it.

Ok, so I might have lost some of you with that last paragraph, right?  I mean I’m fairly sure that all you want to do is have a cell phone that actually makes a phone call and maybe do some cool stuff like listen to music and check the internet maybe even toss around a few Angry Birds.  Now you have to wonder if you’re holding some kind of contraband akin to a Mexicali cartel with the ATF ready to bust down your door for crossing the mighty wunderkinds in Cupertino.

Allow me to get a few things out of the way here.  First, I’m neither a lawyer nor do I try to pretend to be – that in and of itself would just be weird.  My opinions on this matter don’t originate from a legalistic point of view but from what I like to think of as a practical, common sense point of view.  I don’t believe anyone has the right to steal copyrighted ideas and sell them off to consumers as their own.  As a part of the lawsuit against Samsung, Apple claimed that Samsung “stole” many of Apple’s aesthetic designs such as the “rounded corners” of the iPhone and iPad and the universal search function along with the pinch-to-zoom function – which allows you to zoom in on pictures.

First off, let’s talk design.  Now I’m not the sharpest tool in the shed but I find it hard to believe that anyone has a corner on the market of rounded cellular phone edges.  And God forbid they make a cell phone with rounded edges, they’re open to litigation for doing so.  In 2006 Samsung designed a cell phone called the F700.  Here is what it looked like. 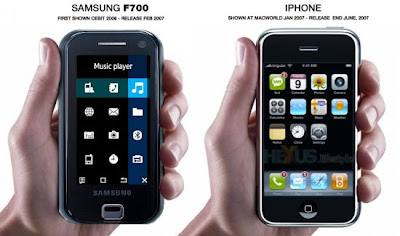 Look familiar?  Now who’s to say that the boys over at Apple didn’t take some, I don’t know, divine inspiration from this and use it in their iPhone designs?

It’s kind of a silly argument that Apple is trying to make because what they are saying is they invented the rectangle.  Elmo better get his checkbook ready because he and his friends on Sesame Street need to cough up some coin if they want to keep using that signature Apple product.  Apple didn’t invent the touchscreen.  No that honor goes to Mr. E.A. Johnson of the Royal Radar Establishment in Malvern, UK around 1965 to 1967.  They certainly didn’t invent the cell phone.  That would be Mr. Martin Cooper of Motorola.

So what is it with Apple and they’re litigation happy mentality that seems to be on an unending, self-sustained path?  Does the Ford Motor Company get to sue Chevy because it too makes cars with four tires and an engine?  Could all of this be something far grander and far more Machiavellian than trying to take out the expected competition from other cell phone designers?  It’s not like Apple needed the billion dollars, they’re more valuable as a company than some nations – perhaps the U.S. included.

When Walter Isaacson wrote his unauthorized biography of the late Steve Jobs, he shed a great deal of insight into how deep a dislike Jobs had for Google and it’s Android operating software – the lifeblood if you will of all of the competitors Apple is suing.  In his book Isaacson reports Jobs saying,

“I will spend my last dying breath if I need to, and I will spend every penny of Apple’s $40 billion in the bank, to right this wrong,” Jobs said. “I’m going to destroy Android, because it’s a stolen product. I’m willing to go thermonuclear war on this.”

Interesting because according to the history of Apple’s rise to power, it is well know that Jobs was given access to some of Xerox’s technology, including the mouse – and upon paying for the rights to see the technology – Jobs instructed his people at Apple to design a cheaper and better version of Xerox’s mouse.  The better mousetrap – pun intended was underway.  I don’t recall Xerox soiling their panties on that one.

This is pretty simple if you ask me.  This is a new Cold War and Apple has Google and Android in its crosshairs.  Apple doesn’t give two rips about rounded edges or pinch-to-zoom or screen size.  This is Steve Jobs’ final edict as CEO of Apple – destroy Google.  Just like the actual Cold War – the United States and the Soviet Union never fired one shot at each other directly – only against their subordinates – the Vietnam’s and Latin American nations of the world.

There was a time I really wanted that iPhone.  Guess what happened?  I found the better mousetrap.  This saga is far from over and you can be sure the only winners of all of this and the future litigation's will be the lawyers.  Shakespeare was right I think.

Posted by The Spector Sector at 9:57 PM No comments: