The Curious Case Of PED's 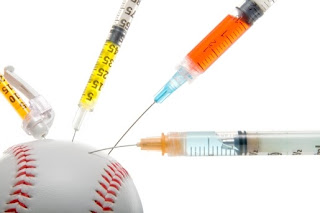 With the revelations of the Biogenesis investigation by MLB coming to the forefront this week, just about every sportswriter has put in his or her two cents regarding this story and how performance enhancing drugs plays into professional sports in general.  Even broadcasters are getting into the mix now.  The other night during the Mets/Rockies game, Gary Cohen and Keith Hernandez touched on the issue in a way that really hasn’t been by most sportswriters.  It doesn’t come as a shock to me since SNY’s Emmy winning team of Gary Cohen, Keith Hernandez and Ron Darling are arguably one of the finer broadcasting teams in professional sports today.

Gary, playing devil’s advocate, described how both sides see the issue of PED’s.  One side taking the majority stance that there’s no place for PED’s in Major League Baseball. The prevalent idea is that if players are found to have used them, heavy consequences should follow, with the ultimate penalty being banishment.  The other side, which I found interesting in how Gary described it, was how some take a more “Libertarian” approach regarding PED’s, stating that if a player is willing to risk his health then it’s on the player.  There was a brief pause when Keith Hernandez, in a rare moment seemed totally engaged in the conversation, chimed in and said as I paraphrase, “You can’t say it’s a matter of being Libertarian if what you’re doing affects others negatively”.

After listening to Hernandez huff and haw all season long when the team would head into extra innings or deal with an unfortunate rain delay, it was nice to see Keith the curmudgeon not chomping on the bit to tell everyone to get off his lawn.  It was a brief moment but one that made me smile and I’m a Libertarian.  The funny thing about Libertarians is that we usually get attacked from all ends of the political spectrum for being what others claim to think we all are.

I’m not saying Gary Cohen was attacking Libertarians so much as he was simply trying to state a point, albeit a bit awkwardly. Not all Libertarians are cut from the same cloth.  Most teeter on the political spectrum depending on the issue – but in the end we all share the same edicts of individual liberty and freedom but, with respect to the law. Libertarians are not Anarchists.  Therein lays the difference between those who say PED’s should be allowed in professional sports and those who disagree, and no it’s not because of arbitrary drug laws.  It’s about fairness.  It’s about the law.  Sometimes laws are in place that we all don’t agree with but, that’s life in a democracy.

The idea of simply taking a drug that could, with the emphasis on could, make you better at what you do for a living is a tempting idea in spite of being morally suspect not to mention with the potential of being physically damaging.  In professional sports, especially Major League Baseball, it’s a misnomer to think that sticking a needle in one’s ass will turn a Felix Millan into a Ted Williams. With stringent drug testing now in place, including testing for Human Growth Hormone (HGH), Major League Baseball is now one of the better examples of a professional sport trying to keep itself as clean and legitimate as possible.  How can the quest for legitimacy be a bad thing is beyond me?

When it comes to the use of PED’s in professional sports, many Libertarians, some of which I have a great deal of respect for, have said that PED’s, like other illegal drugs, shouldn’t be banned from professional sports no more than cocaine should be illegal for you or I. Nick Gillespie, the editor-in-chief of Reason magazine and Reason.com, seems to think most sports writers are hyper moralistic on the issue of PED’s as he stated in a recent article regarding Ryan Braun.  I have a feeling that he’s not much of a sports fan especially based on how he views the majority of sports writers. Not well if you read his article.

But with all due respect to Nick Gillespie or even the great Greg Gutfeld, whom I’m told was very disappointed to find out that purple unicorn’s weren’t allowed at Churchill Downs; PED’s affect not just the players that take them.  They also take away jobs from those trying to do it clean.  Take this which was tweeted by former major league pitcher Dan Meyer:


"Hey Antonio Bastardo, remember when we competed for a job in 2011.  Thx alot. #ahole"


Bastardo was one of the 13 players suspended by MLB in lieu of the Biogenesis investigation.  So, does this mean Dan Meyer should just shut the hell up, have a Coke and a smile? Should he just tip his cap to Bastardo (yes, that’s really his last name) shake hands and let bygones be bygones?  I’d be just as pissed as Meyer if I were in his shoes. I understand, but not totally agree with the logic that if PED’s and drugs in general weren’t illegal, the stigma which draws people to them in the first place would decline.

Sure in an academic hypothetical arena that may be possible but do I really want my daughter to be able to one day to walk into a 7-11 to buy a Slurpee and have an HGH power bar sitting next to the Twizzlers?  While we’re at it, put the cocaine pixy sticks next to the Sweet Tarts.  Sorry but the old curmudgeon in me says no to such a grand experiment.  I guess I’m not a real Libertarian huh?

The blasé attitude some have regarding allowing PED’s into professional sports stems from the idea that they believe that fans don’t really care how the players do the sometimes incredible feats that they do.  I disagree.  In a perfect world, I don’t even want to have this discussion with my daughter but when and if I do, I want to tell her that her favorite player(s) did it clean.  Let there be a level playing field and then let individual talent take over.  I look at it this way, would you be fine with allowing kids to take their iPads with them while taking their SAT exams?  Fair or unfair; you decide.

People often forget during this whole controversy with these players being caught taking PED’s, that PED’s are illegal unless prescribed by a physician for an actual medical condition, you know like dwarfism.  The last time I checked Eddie Gadell hasn’t suited up in a few years and if he did I have a feeling Brian Cashman would’ve tendered him a contract by now.

Now get off my lawn!
Posted by The Spector Sector at 5:05 PM No comments: