He Stole Their Souls 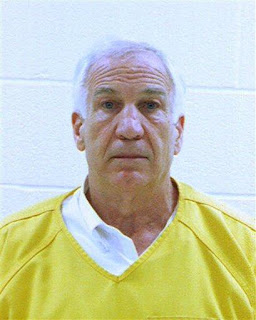 At first I was unsure if I really wanted to wade into this tragic story mainly because of how disgusted I am with the subject; however psychologists have often said that talking about something unsettling is the vehicle which provides a catharsis.  I’m not sure if it’s really a catharsis I seek since the only emotion I have about Jerry Sandusky is the all-encompassing satisfaction that I would feel from tossing him into a pit with death row convicts high on bath salts.  Here’s hoping the experts are right but more importantly here’s to hoping that his victims who desperately need some solace, can in some way find it.

Jerry Sandusky was found guilty Friday night on 45 of 48 counts related to the sexual abuse of boys.  The verdict encapsulated what began with Sandusky’s arrest in November of last year which prompted the school to fire the iconic head football coach, Joe Paterno, stating that he exhibited a lack of leadership after fielding a report from assistant coach Mike McQuery who witnessed Sandusky in the Penn State locker room shower in 2001 raping a boy.  Yes, in 2001.

Now ask yourself this question, if you or someone close to you suspected a colleague - a subordinate – of systematically abusing children and the very least you did was to simply report it to your boss, would you be alright with that especially if nothing materialized afterward?  To those who’ve defended Paterno tooth and nail to the end, did it ever occur to you that Paterno could have asked for to step down as his assistant?  He never even demanded an answer from Sandusky, which we know of or even a plea that he receive counseling.  Paterno, himself a father and grandfather could have gone to the police with these allegations, as difficult as it would be considering Sandusky was a personal friend besides colleague.  But he chose not to.  Why?

Some have argued that Paterno didn’t have autonomy over personnel changes. That’s very possible but you can bet that he damn well had a significant say in it but chose to look the other way.  Deniability is so much simpler than the truth and it keeps one’s collegiate football program immune from bad publicity and flush financially. According to the Business of College Sports, the football program generated over $50 million dollars in the 2009-2010 school year.  Gee I wonder why anyone would even fathom the idea of covering up something as horrible as having a predator of children employed at a school, especially if that predator happens to be one of the gatekeepers to the money pot.

I remember when students of Penn State held a rally in support of Joe Paterno, when his integrity came into question when the scandal became public.  Paterno, like so many in positions of authority at Penn State, hid behind either ignorance or in Parterno’s case, administrative process – as he did inform his superiors at Penn regarding the allegations involving his assistant coach Sandusky – and left it at that.  Case closed.  He was one of many enablers.  His career and honor, which was sterling prior to this display of human depravity, came crumbling to an unfortunate end.  The moral here, just because you've done good in the past for many, it doesn't inoculate you from making the right decision when it matters most - no matter what the costs (financially) may be.  Inexcusable and to the students, where's the rally to support these victims?

To me the greatest of those enablers was Jerry Sandusky’s wife Dottie, who sat by his side the entire trial and when she was called to testify told prosecutors that she never heard anything going on in their basement, as it was one of the places where Sandusky’s accusers said he was raped by the “Tickle Monster”, Sandusky’s self-given nickname.  I guess when you’re living a life or veritable luxury, you tend to hear what you want, see what you want and literally believe what you want, as long as it doesn’t interfere with your lifestyle.  I guess she didn’t hear anything when her adopted son Matt, who at the very end of the trial admitted that he too was abused by his father.

To the enablers, Joe Paterno, passed away not too soon after he lost his job as head coach from Cancer, has to answer to a higher authority.  University President Grant Spanier was forced to step down and two Penn State administrators, Athletic Director Tim Curley and now retired vice-president Gary Schultz are facing criminal charges for failing to report suspected child abuse and perjury.  Both are fighting the allegations and awaiting trial.  Of course they are.

Even NBC slithered its way into this story by once again adhering to its sterling journalistic standards, curiously edited the Bob Costas interview of Jerry Sandusky, removing this particular sound bite. The original audio had Sandusky saying

“I didn't go around seeking out every young person for sexual needs that I've helped," Sandusky told Costas in footage that never made the November airing.

Not every, just some.  Shame on you NBC and you really wonder why both MSNBC and NBC are losing viewers by the droves.  You can’t blame it all on Fox.  Take some damn responsibility.

Arthur Aidala, a former prosecutor turned criminal defense attorney said it best the other night when he said that Sandusky, “Stole the souls of these boys.  Leaving them with years of trying to regain what was taken from them.”  Sadly, those 10 boys who are now men, will most likely never have what we would consider a normal life, how could they?  The only respite these victims can have is that the evil that embodied Jerry Sandusky will never see the light of day again.

I want to say that something like this could never happen again but unfortunately as much as I question my own beliefs in a higher power, I’ve pretty much given up on humanity.  When the quest for greed trumps the safety of children, how can you find it easy to have faith?


I have a feeling Matthew Sandusky asked himself that more than a few times.
Posted by The Spector Sector at 8:30 AM