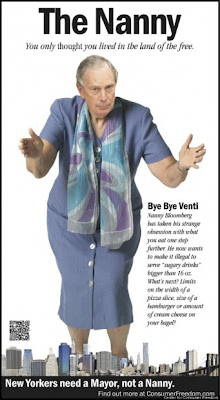 You know I’m beginning to think that maybe those Mayan’s were just really bad at record keeping.  When actual news stories start to read as if they were hatched over at The Onion, you start to wonder if the Mayan they left in charge of their calendar had one too many the night before he sent it to print.  My reasoning behind that: Take a look at the Mayor of New York City, Mike Bloomberg.   It seems that the self-made billionaire financier, turned politician, turned defender of all New Yorker’s with elevated blood pressure, has been waging war on a massive scale for the last few years.

Waging war against what you ask?  Could it be unemployment, which is at 8.8% in and higher than the national average?  Not a chance slick don’t you know, we’re in a recovery.  The media says so.   Is it against Al-Qaeda?  Don’t be silly, we have them on the run.  The President says so.  Hell we can even bring knives on airplanes again.  Besides, Al-Qaeda only cares about overseas diplomatic posts now.  Oh wait, wasn’t it a silly YouTube video that caused that tragedy?

No my friends, you see the Honorable Hizzoner Euphegenia Doubtfire, finally found his political niche; he’s fighting the Jihad of all Jihads’: an intifada on soda, salt and just about any other vice that makes it into his crosshairs.  He’s even taking on excess earbud volume (really I swear I’m not making this up) and–wait for it—the evil incarnate that is BABY FORMULA.

Now before you try to Google any of that, please, allow a few minutes for it to marinate in your brain if anything just to remind you of the fools we the people elect to public office.  Even though there’s a strong likelihood that Andy Warhol will be reincarnated and ooze from your eardrum, take this moment to reflect.   Ok you can breathe easy now; you’re not really crazy, just a bit misguided and occasionally fooled, kind of like a Taylor Swift ex.

Here we have the elected mayor of the largest city in America with over 8 million residents, with a legislative plate that should be quite full of real issues, working tirelessly to get his constituents to eat and drink and behave exactly how he would like them to. And to boot, he’s more than willing to use whatever executive powers he has as Mayor to force them to relent—no matter the ancillary effects.  Effects like those silly separation of powers doctrines politicians are supposed to adhere to by you know that other silly thing called THE LAW.

But what’s having a little nuisance like the law that’s ever stopped this mayor?  New York City had firm term limits in place until he convinced the City Council to allow him to run for a third term—how’s that working out for you New Yorker’s?  He like so many politicians who prefer we do as they say --like good little lemmings--versus as they do themselves; but that doesn’t even scratch the surface of my indignation with this elected uber-nanny—and I’m not even a resident of New York.

He’s been fairly predictable Mayor Bloomberg.   He started with a city wide initiative to reduce trans-fats in food served in city restaurants.  After that his many targets became smoking in public –banning it in public parks and in city restaurants and bars.  His assault continued when he focused his ire against salt-part of an overall initiative to combat high blood pressure in 2010- which took center stage at Gracie Mansion.  So insane his rationale that he's instituted a ban on food that is donated to homeless shelters that cannot have their salt,fat and fiber content assessed. Of course we’re all aware of his desire to ban large sugary drinks, which was recently struck down in court as being an overreach of his executive powers.

And just when you thought he’s had his fill of social tinkering, Major Bloombito (as his FAKE Twitter account parodying his less than eloquent use of the Spanish language would say) is becoming “loco en la cabeza”, deciding that excessive earbud noise is becoming a chronic danger to all human life within the 5 boroughs.   I find myself constantly trying to remind you that I’m not making any of this up.  With that said, I give you the piece de resistance – Mayor Mike has decided in his infinite wisdom—that he would like to  STRESS to new mothers the benefits of breast feeding their children versus using baby formula.  This man is a gift to comedians, political and social pundits alike.  In fact he brings new meaning to the term “the gift that keeps on giving”.

The problem I have with this ninny nanny of a Mayor is how he’s using his position as an elected official, to micromanage people’s lives—all the while thumbing his nose at the legislative process and at the very same people he claims to be so concerned over.  Somehow I find it hard to believe that when Jefferson and the boys sat down in Philly to hash out this whole concept of a free nation, that they envisioned anything remotely close to this.

Don’t get me wrong, it’s not that I’m in favor of people binging on Big Gulp’s until they’re blood registers as a natural sweetener or seeing people gorge themselves on Big Mac’s until the secret sauce oozes out of their pores. Although I've heard Nancy Pelosi can't say enough about it's anti-oxidant benefits. I’m just, as most people are, sick of elected officials trying to control every aspect of our lives and force us to behave in ways they believe is acceptable.  That is not what government—at least ours- was ever designed to do.  If anything it was that type of encroachment into people lives (not to mention those pesky little things like taxation without representation) that formed this nation in the first place.

Imagine if Mayor McNumbnutt decided that he wanted to lower the rates of abortions in New York City and pushed some half-baked idea using the city’s Department of Health as his vehicle.  Some of the very same people who’ve been silent on the mayor’s mini-rampages would suddenly find their collective voices to protest.  And I’m quite sure the media would find a way to highlight their anger on a daily basis.  What are you saying Spector, that the media picks and chooses who and what they prefer in the national debate, skewing it just enough to frame the issue?  Of course that never happens.

Remember this, anytime a politician tries to micro-manage your life, a founding father loses his wings.  Whether it’s the social engineering of the left or that of the right neither should be excused.  Society isn’t some Petri dish used for a politician’s grand experiment nor is it government’s responsibility to tell us how to live.  That’s where freedom and responsibility kick in.  Remember the old saying, “the road to hell is paved with good intentions”.   With so many greater issues that are at play you have to wonder if people like Michael Bloomberg are simply bored with their jobs.

I guess when you become a billionaire and want to kill a little time you either run for mayor and try to force people to do what you’d like them to do or you create a reality TV show pitting celebrities against one another for their favorite charity.  Maybe Mayor Mike can hire Dennis Rodman as his public relations director when he gets back from negotiating peace with North Korea.  I’ll take my liberty with a side order of stay the hell out of my life you nitwit politicians and a large Coke.  Damn you Mayan record keepers.  Damn you.
Posted by The Spector Sector at 7:21 PM