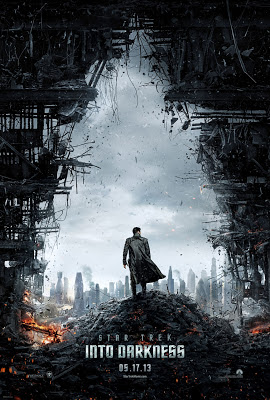 When J.J. Abrams was offered the reigns to the Star Trek franchise I remember feeling a genuine sense of relief. After seeing that former frontrunner Rick Berman had pretty much run the franchise into the ground with its various incarnations on TV, Star Trek was dangerously wearing thin on its audience, despite their rabid devotion.  The iconic American staple was on life support.

Toiling in mediocrity, Star Trek was resurrected by in 2009, effectively hiring J.J. Abrams as its savior. Finally, the studio was willing to give it its just due. Gone would be the penny pinching days of the past as poured over $150 million into Abram’s project.  Star Trek was back, and bigger than Gene Rodenberry ever could’ve imagined.

I liked the premise Abrams offered in his Trek reboot.  Introduce a force that changes the timeline which would alter the path that the iconic characters would eventually take, the path we’ve all come to know, resulting in a completely unknown outcome. All bets were off as Abrams and crew could take the franchise in any direction they wanted – without destroying the rich history that came before.

I know it’s a bit convoluted and you may need to dust off your understanding of how time travel and alternate universes are hypothetically supposed to work.  Or you could just rent another of Abram’s work, the television show Fringe, and get your temporary doctorate in Quantum Mechanics.

Of course there were some die hard fans up in arms.  How could Abrams change the sacred canon?  But the 500 pound caveat in the room was that Abrams really wasn’t changing canon; this was an entirely new history being made here.  I could live with the idea of multiple universes existing.  It was dare I say, fascinating.  Abrams spoke about how having an alternate timeline would open up new ideas and take the characters to places never before taken– something he’d be able to tackle after the initial reboot in 2009.  So here we are, four years later, and J.J. Abrams has made good on that promise.  Well...sort of.

I’m not going to try and keep this spoiler free so if you haven’t seen Star Trek Into Darkness then you better stop reading now.  What we have here with this film is an Abrams-verse quasi mash-up of the original Star Trek episode Space Seed and Star Trek II – The Wrath of Khan.  Yes, Benedict Cumberbatch really is playing Khan Noonien Singh, the character made famous by Ricardo Montalban.  The sad part is his character in Into Darkness is hardly the real focus at all.

After months of denying that this was the case it turns out that Abrams was just toying with the fans as he usually does in the spirit of secrecy.  He played the same coy game while he was filming Cloverfield.  At the time, everyone thought that Cloverfield was just the code name for the actual film Abrams was working on, Voltron.  Yeah, not so much; and to many a fan’s dismay it was about an alien under who began wreaking havoc.  Kind of like a really big version of Mike Bloomberg stuck in the subway searching for people carrying Big Gulps.

Into Darkness begins with the crew of the on a developing planet whose indigenous population is at its earliest stage of evolution.  The natives are in danger of extinction, as a nearby volcano is about to erupt.  Kirk orders Spock to enter the volcano and use a cold fusion device to render it inert.  Meanwhile, the shuttle used to lower Spock into the volcano becomes damaged and needs to return to the , leaving Spock moments from certain death.

Kirk, realizing his first office and friend is about to die, orders his crew to move the (under water no less) into transporter range – which also reveals the to the primitive natives – breaking the major rule in Starfleet, the Prime Directive.  Of course Spock reminds Kirk that “the needs of the many outweigh the needs of the few, or the one”, a clear homage to Wrath of Khan, one of many in this film.  He pleads with Kirk to let him die rather than expose the ship to the inhabitants of the planet.  Of course Kirk wouldn’t allow that.

The crew heads back to earth with Kirk having to face the wrath of his mentor as he’s scolded and once again demoted to first officer by Admiral Pike.  Regardless of Kirk’s actions you would think by now, Pike and Starfleet would have a bit more faith in him.  Instead we see a retread where he gets demoted, alliterating to the original films.  After his demotion we’re introduced to the two main antagonists of the film, first the head of Starfleet, Admiral Alexander Marcus played by Peter Weller and later on we are introduced to John Harrison, a.k.a. Khan.

Because of what happened in the previous film – more importantly the destruction of Vulcan by Nero – Admiral Marcus in his desperation to protect the Federation, decides to thaw Khan and utilize his advanced intellect to build even more deadly weapons to keep Starfleet ahead of the curve, starting with the USS Vengeance; just think a REALLY big version of the Enterprise.

In exchange for his help Marcus offered Khan and his crew their freedom.  The audience has no idea that any of this subterfuge is taking place.  Khan attacks London and Starfleet headquarters, killing Kirk’s mentor Admiral Pike and begins Marcus’ plot to draw the Federation into an all-out war against the Klingons.

Marcus reinstates Kirk to captain of the and sends him on a mission to kill .  The film touches on a few relevant and current issues (drone strikes anyone?) when Marcus gives Kirk new long range photon torpedoes to kill Harrison who’s taken refuge on the Klingon home world.

Tensions rise on the Enterprise as no one is comfortable with the idea of executing Khan without bringing him to justice to answer for his crimes.  Scotty issues his displeasure with the weaponry being considered and resigns his commission.  Spock pleads with Kirk to reconsider assassinating Khan and in the moment where Kirk addresses the crew of the Enterprise we see Kirk’s true nature, as he states that they’re on a mission to capture Harrison.  Among the crew we have a stowaway in Doctor Carol Marcus.  Yes, that Carol Marcus.  Those of you unaware she was Kirk’s love interest whom he fathered a child with who was killed by Klingons.

What ensues is a film filled with constant action beats; almost too many since I thought it sacrificed some character growth.  The core of what made Star Trek so great was the interrelationships created by each of the characters and unfortunately, this crew just doesn’t have the luxury of having spent that much time together.  And because Abrams decided to use moments from Wrath of Khan, many scenes that are meant to spur great emotion come off as forced.  And yes…someone screams KHANNNNNN! And it isn’t who you’d think.  Et tu Spock?

The more I think of this film the more I think of the criticism William Shatner made to Abrams regarding his films when he said they lacked “heart”.  At first I just took it as sour grapes on Shatner’s part but I can see what he means by his criticism – even if it is slightly unfair.  Like I said these particular actors haven’t spent decades in the consciousness of moviegoers therefore you can’t expect to feel exactly the same for them as you would the original cast – no matter how inventive the script is.

The reveal of Harrison as Khan came across to me as a bit of a letdown.  First, Cumberbatch physically looks nothing like the history of the character which was essentially supposed to be of Indian heritage.  Cumberbatch’s thick English accent even led many fans to believe him to be an alternate timeline version of Jean-Luc Picard.  Ironically the role of Harrison/Khan was originally offered to Benecio del Toro.  Then there was the months of denying from Abrams that Khan would even make it into the film at all.

Star Trek Into Darkness wasn’t a bad movie, far from it.  It had a very moralistic message that resonates with the world we live in today.  Maybe it was a bit too naïve for my tastes. Do we go down the same road Marcus does, trading long held values for the comfort of being secure?  It’s interesting that Abrams and his team used the idea of long range photon torpedoes for Kirk to just kill Harrison – no questions, no trial – just a push of a button.  Was it a condemnation of what we’ve become as a nation post 9/11?  During the credits you see that the film is dedicated to the post 9/11 veterans with an iconic scene showing a Starfleet Honor Guard folding the Federation flag towards the end of the film.

Abrams makes Kirk question his purpose and his values and the film does the same to the viewers as well.  Like last week’s Iron Man 3, Into Darkness is far from a perfect film.  I had issues with the rehash of Khan and the ending – which I was almost not going to talk about here but decided I had to.  When the Enterprise is falling to earth powerless, it is Kirk who realizes his purpose, and saves the Enterprise and her crew.

It was the death scene in Wrath of Khan, only flipped and it was a powerful scene and would’ve remained a powerful scene if Kirk would have been allowed to pay that ultimate price.  Unfortunately Abrams played it safe as Bones discovered that Khan’s blood had Lazarus like abilities.  So after Kirk “dies”, and after Spock takes on the final (unecessary?) battle to capture Khan (didn't Khan's crew also have the same type of life giving blood?), bringing him and his blood back to Bones, Kirk is injected and yes…lives again.  In my opinion the worst part of the film as it downplayed the emotional impact of Kirk’s sacrifice and the original scene from Wrath of Khan, where Spock does the very same.

All Abrams had to do was allow Kirk to die, at least in the interim.  An ending scene showing a distraught Carol Marcus in front of a computer screen with tears in her eyes, as she works on her “Genesis formula” would’ve set up the next film perfectly and even though it would have taken it’s clues yet again from the canon, it wouldn’t have lessened Kirk’s sacrifice.  Not to mention it would’ve done exactly what Abrams always said he wanted to do – which is to put these characters in NEW situations we haven’t seen before.

The Sector gives Star Trek Into Darkness 3 out of 4.
Posted by Unknown at 10:29 PM