Sometimes it can be incredibly insidious; a stalking relentless beast that methodically operates on a timetable of its own choosing.  It has no regard to your wishes, desires or your plans.  You’re a number to it at best.  You go about your life indifferent to your own mortality – at least if you’re under 30 you do.   Ultimately, you have no real control over it.  Sure you can try to do the obvious.  Eat well.  Exercise.  Don’t smoke.  Don’t drink.  But really that’s advice for just about anyone who’s trying to maintain a healthy lifestyle.  However, it’s a far cry from being a panacea.  Hell it’s a far cry from being a foolproof model for prevention.  For this predator, in spite of all of our 21st century medical advances, still has an unmovable vice grip on humanity.  James Rodgers, if he were here would agree.  Who’s James Rodgers?  He is and was my wife’s Uncle and last week Uncle Jimmy was laid to rest after battling cancer for two years until it finally metastasized to his brain.  He was 60 years old, still married to his high school sweetheart with whom he had three daughters.

It’s not the first time Cancer has taken a member of my family.  My Grandfather battled with bladder Cancer and fought almost two years on hospice until he could fight no longer.  It ravaged a man who in his prime could walk entire New York boroughs barely breaking a sweat.  It took my wife’s mother, Arlene Rodgers, just a few years ago, she was only 54.  It’s taken the young, the elderly, the poor and the wealthy affording zero prejudice along the way.  Of all the medical advances we’ve made as a species, it kills me to think that we’re able to re-grow hair for balding men, lengthen women’s eyelashes with a cream, reverse the signs of aging using Botulism shots in the face and let’s not forget what that little blue pill can do for men.

However when it comes to Cancer, we’ve barely scratched the surface on discovering a cure.  Hasn’t it’s time come, no? And only through research – painstaking and ultimately expensive research, will that day come when we can stop blindly shooting arrows at this cagy beast.   That’s one of the reasons when my fellow blogger at Metsmerizedonline, Taryn Cooper, also the driving force behind A Gal For All Seasons, approached me with writing this, I couldn’t help but feel both honored and proud of what she’s doing.

This coming November, as it has since it’s humble beginning in 1970 when a mere 127 runners paid a $1 entry fee, Taryn will be running in the ING New York City Marathon as a member of Team McGraw which benefits the Tug McGraw Foundation.  The Foundation seeks to improve the quality of life for children and adults affected by neurological conditions such as brain tumors, post-traumatic stress disorder and traumatic brain injury. As a part of Team McGraw, Coop is raising funds to support in this effort.  I’m not the only one to feel a sense of pride with what Taryn is doing.  I think her husband, Ed Leyro, sums it up best:

Think of how proud Mets fans are of the 1969 and 1986 World Championship teams. That level of pride doesn't even come close to what I feel for Taryn. I have difficulty running around the block without complaining. She's going to run around the entire city of New York! And she's doing it for a fantastic cause. It's impossible not to gush with pride when I think about her selfless act.

Brimming with pride for what Taryn is undertaking, the Leyro family are no strangers to the harsh reality that Cancer is as Ed told me:

Cancer has hit very close to home in my family. My mother is a two-time cancer survivor. She was diagnosed with breast cancer in 1979 and colon cancer in 1990. I'm happy to report that the year is now 2012, and my mother is still with us and cancer-free! Without all the money raised for cancer research over the years, I might not have been able to enjoy all these years with my mother.

It’s sobering when you think of it that according to the American Cancer Society one out of every two men will have some form of Cancer in their lifetime and one out of every three women will as well.  Think of that next time you’re at work or with your friends and family.  Cancer, if anything, is such a harsh reminder of our mortality.  I asked Taryn what drove her to attempt this incredible mental and physical challenge: 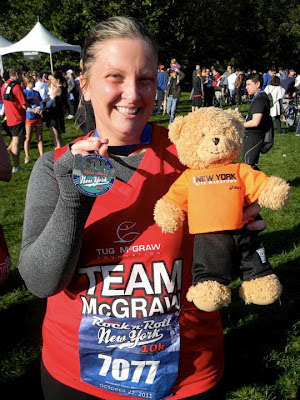 The NYC Marathon has been on my "bucket list" of things to do since I was probably a teenager. I just thought the event was something larger than myself, and I wanted to be part of it. The interest has waned over the years simply because the magnitude of running 26.2 miles just seemed too unrealistic. Until a few things changed. I live a few blocks from the finish line of the marathon, and every year on marathon Sunday, I see all the finishers walking through my neighborhood. And every year, I wonder if I'll do it myself.
My friend Sharon Chapman ran the marathon in 2010, and she was the one who suggested that instead of relying on the lottery to enter the marathon, that I run for charity. Her charity was the Tug McGraw Foundation, which raises funds to assist in quality of life issues for brain cancer survivors and those living with neurological disorders.

To a Mets fan, the very concept of "Ya Gotta Believe" hits home and this was something Tug McGraw believed in until his untimely death, due to brain cancer. It made perfect sense, especially since my hero, Gary Carter, died of the affliction early this year. My friend Kara is also running the marathon for Team McGraw in honor of some family members who had brain cancer, and her father who suffers from a seizure disorder. Team McGraw just made sense for me. If I can run 26.2 miles, and bring awareness to a charity that does great work, then my job is pretty easy!

Those of you who know me know that I rarely if ever ask you to do something.  I would never tell you who to vote for or what to believe, for I personally believe that those ideas HAVE to come to you on your own.  YOU have to do the legwork for that, especially if it’s ever going to have some greater meaning for you.  This is one of those rare times when I ask all of you to imagine if every reader pledged a dollar to Taryn in the New York City Marathon – just a dollar.  The hundreds of thousands of dollars would be mind blowing and the good works that the Tug McGraw Foundation provides would be greatly effected and enhanced.  Taryn’s goal is to get to $3000 and so far she’s already raised more than half of that.  I say why stop there.  You Gotta Believe anything is possible.


The Tug McGraw Foundation is a 501(c)(3) nonprofit, tax-exempt organization designated by the Internal Revenue Code. Their tax identification number is 20-0586256.
Posted by The Spector Sector at 10:20 AM