What Can Be Learned From The Yankees Collapse 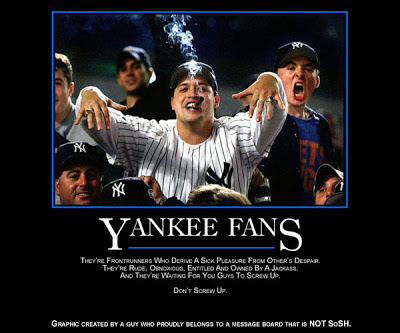 Ok, I admit, I did my best Quagmire impersonation the other night, in spite of my better angels trying desperately to keep me in check.  Not even Charlie’s Angels could keep me from succumbing to the dark side when I saw the best team money could buy get brutally swept by the best thing to come out of Detroit that wasn’t bailed out by the government.  It’s one thing to get to the American League Championship Series and lose but for the New York Yankees to lose 4 in a row and lose them by barely showing up was hard to watch, even for a Mets fan.

To think that the Yankees actually made President Obama look thoroughly engaged in his first debate in comparison to their performance against the Tigers.  But I digress, who are we kidding; it wasn’t that hard for me to watch.  I may have revelled in the poetic justice of it all yet I ironically realized in the end that I don’t despise the New York Yankees as some people do, and I’m very ok with that.  Now, as to some of their fans – well that’s a whole different ballgame altogether.

Look I get it.  Who am I to criticize the Yankees for being swept in the Playoffs? My team hasn’t even had a whiff of a whiff of playoff baseball since Carlos Beltran stood like a deer in headlights taking Adam Wainwright’s curveball for strike three in 2006.  You can make a good argument that stemming from that moment the Mets began their spiral into the mediocre mess that they have become today.  And make no mistake about it; it’s rare to find a Yankee fan that doesn’t like to remind us of that among other things.  Because you know, it’s always endearing to be a bully.

What other things you ask?  How about their 27 World Championships?  Sure I’d be proud of my team if they racked up that many Championships, who wouldn’t?  But I’m pretty sure, no I’m very sure I wouldn’t rub it into everyone’s faces or use it as my main retaliatory weapon anytime someone criticizes my team.  It reeks of elitism – and that is why no one is shedding a tear that Detroit handed the Yankees a beatdown of the ages.  I particularly enjoy the brand of Yankee fan who just about takes personal credit for those 27 championships.  As if it weren’t for their bloviating ad nauseum about their greatness, those teams never would have existed.  Over-compensating much pre tell? We get it, your team is great.

I know I’m not breaking any new ground here saying this.  We all know where the Mets are financially as an organization or at least we think we do and it’s no secret that times have been better.  There’s that certain percentage of Yankee fans that love to say how the Mets are cheap and don’t care about their fans.  Hell at times even I’ve felt the same malaise from this organization but when you look at the facts you realize that to say the Mets have always been cheap is more like a cheap shot than fact.

It doesn’t take much to Google the numbers and see where the Mets have ranked in payroll over the years.  We all know they spend (spent).  They’re just very good at doing it very bad.   Athlon Sports ranks the Mets the worst of all MLB teams from 2001 to 2010 when it comes to spending in relation to wins.  But don’t try and get intellectual when arguing with these particular Yankee fans.  To them it’s all about the bling and boy do they have the bling in the enough so that even their mistakes (Carl Pavano, Jose Contreras, Brien Taylor, A-Roid) can be easily swept under the rug.  However even the mighty have their limits as Hank and Hal Steinbrenner have made it clear that they want to get their payroll under the luxury tax threshold.

Of course there’s that “aura” that playing for the Yankees brings.  Even I fell for it when Raul Ibanez seemed to channel every Yankee great in this postseason with his homerun fest.  Not bad for a 39 year old.  Yet if you ask anyone impartial, which team regardless their finances, has a better crop of young talent making its way up, one would be hard pressed to say it’s the Yankees.

It’s not like I’m drinking the Kool-Aid here.  I know the Mets aren’t exactly overflowing with minor league talent – as a Mets fan I know that’s hardly the case – but tell me what version of Zach Wheeler or Matt Harvey or even Wilmer Flores do the Yankees have?  If they did, don’t you think one or two would have been promoted this year and don’t try to pull Ivan Nova out of your pinstriped posterior. If he’s really one of their top prospects Brian Cashman has a lot more to worry about than how he’s going to try to convince a team to take Alex Rodriguez off his hands.  It seems Cashman could care less that his team has become the professional sports poster children for AARP as they have the oldest team on average in MLB.  This is what Cashman said about his geriatric lineup:

Well Socrates has spoken I suppose.  Talk about short sighted and the epitome of elitist.  The only reason Brian Cashman can say that is solely because of his owner’s pockets.

The Mets and we as fans can learn a great deal from the debacle that is unraveling in the .  Sure if you’re one of those superficial, seasonal Yankee fans that only come out of the woodwork in October then you probably should ignore the warning signs.  Yes having almost unlimited funds can buy great players – eventual Hall-of-Famer players even.  But if history has shown, it doesn’t buy championships.  It’s signing the right players to augment your team, when you’ve developed it enough from within. Sure the Yankees can sign whoever they want and I’m pretty sure they’ll make a push for ’ Josh Hamilton this winter.  Talk about lighting a fuse on a Molotov cocktail.  The moment he steps out of his taxi cab onto , expect an epic implosion worthy of wall-to-wall TMZ coverage.

Some of those Yankee fans might think I sound like just another jaded Met fan.  Sure it’s been rough the last few years but what they call being jaded I call appreciation.  Mets fans appreciate their team.  Darren Meenan over at the 7Line rounded up hundreds of his troops on the final game of the year at Citifield with his mantra: loyal to the last out.  Now compare that to the empty seats in Yankee stadium during the playoffs.  It was shameful that Yankee officials asked fans to move to the lower decks to keep the empty seats out of the TBS camera view.  Elitist, entitled, arrogant and now you can add indifferent.  There is no other way to define it.

If the Wilpons can ever get their financial house in order, hopefully with the proper gameplan which includes taking advantage of the amateur draft, including signing and developing the players they draft, and spending wisely in the free agent market, perhaps the Mets can right this ship.  If the finances continue to tighten just enough to keep the Wilpon’s treading water and whatever funds made available are spent poorly, then nothing changes.  The greatest success the Yankees had happened when their core players were supplemented with talent around them.  The opposite of that is what never seems to truly work at least not long term.  All that’s going to do is make you laugh under your breath at your TV when that house of cards comes falling down.

Giggity. Giggity.
Posted by The Spector Sector at 10:37 PM