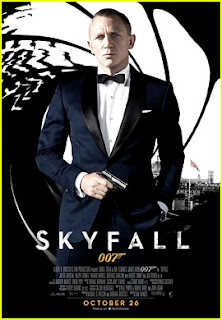 James Bond will be back.

That’s been the promise moviegoers have been given over the past 50 years at the end of every Bond film dating back to the early days of Sean Connery.  The world’s most famous spy is back on the big screen for the 23rd time in Skyfall as MGM studios has finally navigated its way out of a financial abyss.  Daniel Craig reprises the role of the British MI6 agent for the third time.  His first sip of the Martini came in 2006, when the series was re-booted and left the audience happily shaken and stirred for the future of the franchise.

The producers wisely tapped into the original and realistic Ian Fleming source material.  Gone was the fanciful turn that was beginning to embody the Brosnan films.  The studio scored a major box office hit with Casino Royale and continued in 2008 with the somewhat disappointing Quantum of Solace.

Let’s just say, the four year wait was more than worth it.

In Skyfall we see a Bond, especially since he earned his double-o status in Royale, far more polished if not a bit weary from the realities of the job.  He’s teamed with a fellow agent, Eve, who are both in pursuit of a terrorist(s) who has acquired a hard drive containing the names of MI6 operatives inbedded in terrorist organizations globally.  This may not be an entirely original premise as I’m sure Tom Cruises’ Ethan Hunt would raise an eyebrow to this, however it works for Skyfall and leads into one of the best opening Bond scenes to date.

Sam Mendes, who directed Craig in Road to Perdition, has created not just a stand-alone Bond film with Skyfall but a Bond film that pays proper homage to the 50 year history of the franchise with many alluding references to previous themes of redemption to the joy that is the Bond Aston Martin.  In fact I would consider Casino Royale as the much needed re-boot of Bond with Quantum of Solace transitioning him past the personal loss of Vesper Lynd with Skyfall bringing him back full circle to the roots of his character – both figuratively and literally as Skyfall just so happens to be Bond’s childhood home.

One of the reasons for EON’s reboot of the franchise was the fact that they felt it was headed into a more unrealistic slightly video game-esque genre.  And with Pierce Brosnan getting up in age and no longer under contract, producers Barbara Broccoli and Michael G. Wilson decided to go in a different direction casting a younger Bond and stripping the character of its previous fanciful turns, i.e. no more crazy Q gadgets and an almost complete lack of humor.

In both cases the producers took it too far and in Quantum of Solace you would be hard pressed not to assume you were watching a Jason Bourne film and not Bond.  Mendes and the producers finally realized this and while they have remained true to re-booting Bond, Skyfall does put a smile on the faces of long time Bond fans.

Once again Q branch is resurrected and this time around Q is played by Ben Whishaw.  He’s incredibly young, cocky and the perfect Yin to Bond’s Yang.  No pun intended there, really.  The sly and comedic repertoire between he and Bond are part of what made these films so fun and to see it back in the franchise and done this way was enjoyable.

Judi Dench returns for the seventh time as the head of MI6, M.  Beyond bringing obvious gravitas and weight to the film, Dench’s’ M, referred to by her aides and agents as ‘Mum’, is about as close to a mother Bond has had.  And without giving away too many spoilers let’s just say at the end of Skyfall, that feeling is more than shown and appreciated by Bond.

Ralph Fiennes joins the cast as Gareth Mallory, a minister in the PM’s cabinet who’s essentially M’s boss, and with the loss of the hard drive, is intent on seeing M sent out to pasture.  Again without giving too much away, it’s safe to assume we’ll be seeing Mr. Mallory again in future Bond films.
It’s not really a spoiler to mention that Javier Bardem plays the baddie – Silva.  There’s something about Bond villains that either puts them in the forgettable category or the infamous category.

Bardem’s acting chops clearly put him in the latter.  You can see that Bardem really relished this role and while there were times he came awfully close to camping it up, he kept it just creepy enough to keep it in check.  The scene where he meets Bond for the first time turns into the most uncomfortable yet amusing seduction scene ever in a Bond film.  Yes, a seduction scene.

Skyfall centers on the relationships between Bond, M and Sliva and how they all interconnect with each other.  Silva is looking to kill M for some past indiscretion and Bond acknowledges the ‘Mum’ relationship that he has with her and takes it upon himself to protect her.  The writers and Mendes do a remarkable job at giving the audience a view into Bond’s history unlike any we’ve seen in previous films.

The ending will leave you shaken and stirred that the future of Bond is now firmly re-booted and re-set properly and fully.  Bond once again can laugh at himself and the audience can once again feel the future for this iconic character is set to go, even when the ending credits come and tell us, he’ll be back.

Posted by The Spector Sector at 5:46 PM