Have Knee Will Jerk

We can file this under the title:  Well that didn’t take long. 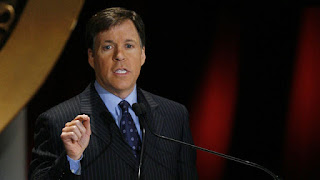 Over the weekend we learned of a tragedy out of Kansas City when Kansas City Chief’s linebacker Jovan Belcher murdered his girlfriend and committed suicide - in front of team officials.  Apparently according to reports, Belcher thanked general manager Scott Pioli and head coach Romeo Crennel then shot himself in the team’s practice facility parking lot.

Police reports over the weekend had a woman reporting that her daughter had been shot multiple times at a home just outside of Arrowhead Stadium.  It turned out to be the mother of Kassandra Perkins, Belcher’s girlfriend.

There were serious questions as to would the Chief’s ask the NFL to cancel their Sunday game versus the Carolina Panthers but the team chose to play on despite the horror that took place.  It was during that game, which was aired on NBC’s Sunday Night Football that Bob Costas gave an on air opinion of the situation and took the proverbial knee jerk reaction that in my opinion, is beneath him as one of the finer sports broadcasters of our generation.  Here is what Costas said:

Well, you knew it was coming. In the aftermath of the nearly unfathomable events in Kansas City, that most mindless of sports clichés was heard yet again: Something like this really puts it all in perspective. Well, if so, that sort of perspective has a very short shelf-life since we will inevitably hear about the perspective we have supposedly again regained the next time ugly reality intrudes upon our games. Please, those who need tragedies to continually recalibrate their sense of proportion about sports would seem to have little hope of ever truly achieving perspective. You want some actual perspective on this? Well, a bit of it comes from the Kansas City-based writer Jason Whitlock with whom I do not always agree, but who today said it so well that we may as well just quote or paraphrase from the end of his article.

"Our current gun culture, “Whitlock wrote, "ensures that more and more domestic disputes will end in the ultimate tragedy and that more convenience-store confrontations over loud music coming from a car will leave more teenage boys bloodied and dead."


"Handguns do not enhance our safety. They exacerbate our flaws, tempt us to escalate arguments, and bait us into embracing confrontation rather than avoiding it. In the coming days, Jovan Belcher’s actions, and their possible connection to football will be analyzed. Who knows?"


"But here," wrote Jason Whitlock," is what I believe. If Jovan Belcher didn’t possess a gun, he and Kasandra Perkins would both be alive today."

First off I’m not against anyone giving their opinion, even a sports broadcaster during a football game.  But for Costas to come out and sort-of kind-of separate himself from Jason Whitlock - by saying he normally doesn’t agree with him but on this he does, is just a cop out if you ask me.  Anytime you try to explain actions of insanity with rationality not only are you missing the point that crazy has no boundaries but you prove the point that good intentions mean jack shit.

If a mother drowns her children in a bathtub do we place a ban on Mr. Bubble? If a husband cheats on his wife & she decides to snip off his Twinkie with a scissor do we ban scissors or Twinkies if that?  Don't get me started on Twinkies.  What about the mother who drove her minivan full of her kids into oncoming traffic on a  Long Island highway after she did a few lines of coke...what should we ban there Bob?  Minivans?  Soccer mom’s with suspiciously deviated septums?

Human beings are capable of the most vile behavior.  Yes, if guns didn’t exist, perhaps Jovan Belcher and Kassadra Perkins would be alive today.  You could say the very same about minivans or bath tubs and exacto knives.

I’m disappointed in you Bob, I always thought of you as someone far more intelligent and far less susceptible to knee-jerk reactions to even the most horrible of situations.  I can understand being emotionally distraught, I’ve been there. I guess the culture at NBC has even taken its hold onto you.
Posted by The Spector Sector at 4:16 PM