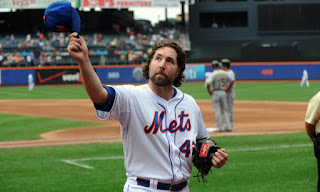 Have you ever wondered what does the term "fair market value" really mean? It's often bantered about in the sports world when an athlete vying for a new contract, tries to sell his talents to the highest bidder. I hear it all the time. To me, it means getting paid for the service you're providing balanced against what others in your specific field are being paid for doing the same. Sounds fairly simple right? You get paid according to what your peers are being paid and how well they perform. That's how it works for everyone- everyone with the exception of one Robert Allan Dickey.

You see, Mr. Dickey, he's just weird. First off, what's with the name? Dickey. Really? He play's professional Baseball for a living but that's a loose term since he happens to play for the New York Mets. Don't get me started on that - talk about having regrets. He's a pitcher but I'll be damned, he's a weird one at that too. He's a knuckleball pitcher. The knuckleball happens to be a last resort pitch used by those trying desperately to hold onto their career.

It's kind of like when Lindsey Lohan play's Elizabeth Taylor in a Lifetime made-for-TV movie. He's also missing a ligament or a nerve or something in his elbow; weird and damaged goods I tell you. Oh and here's the cherry on the top of this sundae, he's 38 years old! He's weird, old, damaged goods - and he wants to get paid "fair market value". I got his nerve- right here.

I admit he did ok last year. He led the Mets in practically every pitching category including usage of the word "enigmatic" 247 times. He was the first Mets pitcher ever to quote Faulkner in a post game interview that left the dreamy Kevin Burkhardt mesmerized in the moment. Oh yeah, and he won the Cy Young award. It's not that I'm minimizing what he means to the Mets but he's replaceable especially that he thinks he should get both "fair market value" and long term security. Sure I know he's just looking for a 3 year extension but he's 38 years old for crying out loud. And you know I don't like long term relationships plus we all know I've had to put a ring on one player this winter so far - two is pushing it! Damn that Beyonce.

Word on the street is that Anibal Sanchez just inked a 5 year, $80 million dollar deal to return to the Detroit Tigers. That's a lot of coin for a guy who's career record is under five hundred. Then you have that kid with the mental issues in Anaheim, Grienke. He just signed a 6 year deal with the Dodgers worth almost $160 million. I guess I have to agree that Dickey is worth somewhere in between those guys, right? Damn market. Here I was hoping it would bottom out and come to me (that's code word for I was hoping Dickey would finally exibit oxygen deprivation from his Kilimanjaro ascent and sign for pennies on the dollar).

Well needless to say, he's feeling fine, a little peeved but otherwise ok. I would be peeved too if my boss asked me to dress like an Elf at the company Christmas party. Maybe asking him to park the cars took it too far. Oh well, you live and learn. I have to get going now, I'm currently texting Alex Anthopoulos but don't worry, I'm multitasking here. My box of chocolates order from Swiss Colony just got approved - on company credit no less. Now that's winning!

All my best and happy holidays,

Sandy
Posted by The Spector Sector at 9:44 PM