This IS the Mega Deal You Were Looking For 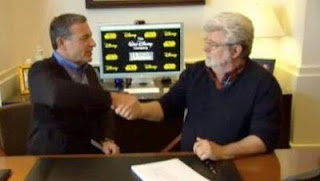 There’s something about being in your mid-thirties to early forties where you can say without a shadow of a doubt, what a major impact Star Wars has had on your life.  I remember being so sick and home from school with a cold in 1980 and all I wanted was for my dad to sneak me into the local theater to see The Empire Strikes Back.  Of course that didn’t happen.  Those crazy parents, always being so parental; bless their souls.  Little did they know the scars it left me with as I had no choice but to watch the greatest of all Star Wars films on VHS – FOUR YEARS LATER and after having seen The Return of the Jedi.  Oh the humanity.

Of course I eventually forgave my parents for their…insidious lack of vision – as I’m sure Palpatine would be remissed to point out.  Yes my parents raised a good (hopefully) person who’s turned into a well adjusted, successful adult and a married parent to his own two year old daughter - who’s soon to be initiated into the world George Lucas envisioned some 35 years ago.  So when I heard a few weeks ago that George Lucas announced his retirement from filmmaking and decided to sell Lucasfilm to the Walt Disney Corporation, I became full of more mixed and odd emotions than the result of a Luke and Leia kiss.  I felt as if a part of my childhood had been surgically removed via lightsaber and sold to a bunch of pesky Jawas (for $4 billion no less). Yet at the same time I felt that if there was one company that could not only preserve but also cultivate the Star Wars Universe for years to come, it would be Disney.

The Walt Disney Company already has quite the portfolio having acquired Pixar (which ironically was a subsidiary of Lucasfilm created in the 70’s and later sold in 1986 to Steve Jobs) early in 2006 and most recently in 2009, added Marvel Studios. And with the success of this past summer’s The Avengers, it’s a safe bet that Lucas’ decision to sell to Disney will solidify that company for years to come.  But the questions on the minds of fanboys and girls alike are, “Did the maker sell out?” Meaning will the Star Wars franchise become even more watered down now that Disney is in control?  Granted, that’s somewhat overly critical but I thought about this for a while and with respect to George Lucas, after seeing the prequels, can it really get more watered down for the masses?

I get it, George Lucas isn’t Quentin Tarantino and it’s not as if everyone is pining for a Star Wars version of Pulp Fiction (other than me perhaps).  Part of what makes Star Wars so universal is that it speaks to everyone at any age but at its core, lay the very foundations of classic storytelling.  Themes such as redemption, revenge, friendship, loyalty, the very battle of good versus evil, all of which make Star Wars timeless.  As jaded as some Star Wars fans have become thanks to the mixed bag that are the prequels, I’m actually not worried that Disney will suddenly slip mouse ears onto Vader’s shiny dome – well maybe if it’s to sell merchandise – but hasn’t all of that cheese been done already and under Lucas’ force grip?

I’ve always believed that the qualities that make George Lucas as great as he is are some of the very same qualities that have constricted much of his work and disappointed some of his fans.  Like any filmmaker, Lucas has always desired (and more times than not has attained) total control over his films as he was essentially one of the original independent filmmakers in .  Sometimes the trade off that comes with total control ends up resulting in tunnel vision.  As much as I’m a fan of his work, I don’t think there’s one fan of filmmaking that thinks George Lucas is a master of the English language.  Dialogue has just never been his strong suit as even Harrison Ford was always fond of saying, “You can write this shit, but ya can’t say It.” – in regards to Lucas’ scripts.

Another drawback of Lucas’ is his almost fervent desire of filming everything digitally.  Any Star Wars fan worth his salt knows the visual differences between the original versus the prequel films.  Because the technology didn’t exist back in the late 70’s and 80’s, Lucas literally had to create the technology himself thus ushering in ILM.  There isn’t a filmmaker in today who doesn’t owe a bit of gratitude for the work Industrial Light and Magic have afforded them but sometimes a good thing can be overused and abused.

There’s a lack of substance and physical reality to some of the work ILM did on the prequels.  Was it really necessary to digitally create a single clone trooper in a single scene?  Was it necessary to replace actual landscapes with digital mock ups?  Sometimes just because you can do something doesn’t mean you should and Hollywood seems to be gravitating more towards blending technology with traditional techniques rather then totally relying on computers to enhance their films.

It has to be difficult for Lucas to turn what has essentially been his life’s greatest work over to someone else even if it is someone he’s known his entire career.  But letting go of the reigns may be exactly what is needed to bring in new, fresh ideas. Luckily for both Lucas and fan’s alike he’s turning it over to someone who has had a hand in creating some of the most memorable films ever to grace the silver screen, films such as, E.T., Raiders of the Lost Ark, Who Framed Roger Rabbit, to name a few.

Kathleen Kennedy has been given quite the daunting task of maintaining one of the greatest film franchises ever made.  Kennedy, a highly respected Hollywood vet, has worked along side the likes of Spielberg, Eastwood, Fincher and Scorsese over the years.  She’s one half of the powerhouse producing team of Kennedy and Frank Marshall, her husband, and alongside Steven Spielberg, formed a triumvirate at Amblin Entertainment.

Letting go for a filmmaker is probably the most difficult thing to do.  There’s a quote that films are never really finished, only abandoned.  I for one feel great hope about the future of Star Wars and what it’s going to mean not only to my child very soon but perhaps even to her children someday.  Plans have already been in place for new films to hit theaters starting in 2015, starting with Star Wars: Episode VII.  Star Wars is rightfully going to become a rite of passage passed down from one generation to the next.  That my friend is what Star Wars is truly about.  Not the special effects or the merchandise or the theme parks. 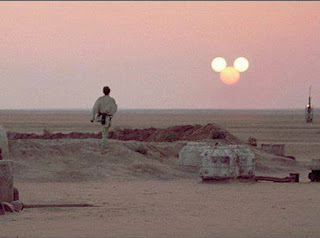 In the words of Master Yoda (sort of):  Hopeful, you should be.
Posted by The Spector Sector at 6:07 PM