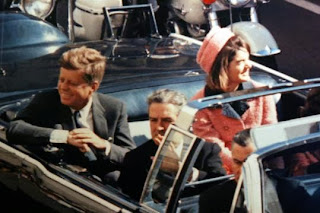 Growing up I was always fascinated with the events surrounding the John F. Kennedy assassination.  I remember being in grade school and while my classmates were writing about where they went on vacation the previous summer, I was writing about the Kennedy Assassination and the conspiracy theories it spurred.  I suppose when you’re in the 8th grade the chances someone, especially a teacher branding you a nut, whacko, conspiracist isn’t quite as likely as when you’re an adult.

Be that as it may, I like the majority of Americans – sixty-two percent in a recent Washington Post-ABC News Poll – never believed the story we were told; that Lee Harvey Oswald acted alone.  Author and all-around anti-establishment guru and author Greg Gutfeld, says this about conspiracies:

“That's the joy of conspiracy: It's an endless bag of Doritos, except instead of chips you get comebacks like "that's what they want you to think," and "open your eyes, dude."

I get what Greg is saying even though I don’t agree with it.  Sure, depending on your point of view, anything can be a conspiracy if you choose not to believe something.  Not to pee in Greg’s Fruity Pebbles a bit, he did say to Chuck Todd of NBC once when referring to Todd’s belief that there isn’t a bias in the media that “denying bias in the media is like denying science”.

“But I guess if you believe in an objective media, you’ll believe in anything: like a whistle is better than a gun; redistribution beats opportunity; black conservatives are Uncle Toms and female conservatives are scolds; that being born white is racist; that tolerance requires calling terror ‘workplace violence’; that our country’s energy can be found in griffin lint; that the tea party is more harmful than drug lords; that Occupy Wall Streeters were cuddly Muppets; that choice matters before birth, not after; that a border is selfish; that every tenet of the left hasn’t saddled most young Americans with a toxic notion of entitlement without achievement, drowning in disposable culture as China rifles our wallets and our hard drives. But it’s easy to miss media bias. To quote Madge from Palmolive [commercials], ‘You don’t see it my dear, because you’re soaking in it.’”

I couldn’t agree more with Greg on this which is why I wonder why he feels that anyone who believes in a conspiracy is a nutball.  The very argument he made to Chuck Todd was a total affirmation that yes, there’s a friggin conspiracy in the media against fairness.  It also begs the question: would Greg consider the events earlier this year in , a conspiracy?  Obviously the official report that a flash mob, fueled by some moronic YouTube video mocking Mohammed, just so happened to attack the US Embassy in Libya killing Ambassador Chris Stevens, was far from the truth yet the administration for two weeks reported it as such.  Come on Gutfeld, brush back the Unicorn hair covering your eyes my man.

Michael Kelly, a Washington Post journalist and critic of anti-war movements on both the left and right, coined the term "fusion paranoia" to refer to a political convergence of left-wing and right-wing activists around anti-war issues and civil liberties, which he said were motivated by a shared belief in conspiracism or shared anti-government views.  He may be onto something there because when referring to the Kennedy Assassination, people of all political stripes don’t believe the official story.  But to go so far as to say it’s paranoia is a stretch.  Besides, haven’t we seen enough government/corporate corruption to assume that anything is possible?  The real question becomes what is provable?

I suppose it’s easier to dismiss someone as a conspiracy nut then try to analyze their point of view.  It always annoyed me that those who believed Oswald acted alone would take what the Warren Commission reported as Gospel in spite of one particularly glaring piece of evidence that seemed to disappear among the sea of evidence and conjecture in the Kennedy Assassination.  While everyone was focused on whether or not Oswald fired the shots and from where, whether there was a shooter on the grassy knoll, or if the CIA or the Mafia played a role, I always focused on what was the most telling evidence of all – the body of the president.

A crime scene analyst worth his or her salt will tell you that the most important evidence in solving a crime, especially a murder, isn’t the weapon, it’s the body of the victim.  The nature of the body can tell a forensic scientist everything from the time of death to what means were used.  The nature of victim’s body is irrefutable evidence. In the Kennedy Assassination however, the handling of the President’s body was as frenetic and unorthodox as the nature of the situation itself.

The Secret Service understandably and ironically went into a hyper protective mode after the fact.  When the President’s body arrived at he was taken into one of the emergency operating rooms.  It was there that ANY possibility of conspiracy could have been extinguished.  The law as it is written in states that the autopsy of a homicide victim must be preformed within the jurisdiction of the crime.  The Secret Service however, most likely under orders from the new Commander-in-Chief, Lyndon Johnson, wanted the autopsy done under the auspices of the Federal Government.  Therefore, after the President was pronounced dead at Parkland, plans were made to fly President Kennedy’s body to .

It was perhaps the key moment of the Assassination that could have either squashed every conspiracy theory imaginable – then again – it could have also been the watershed moment that could have proved, that two shooters, at the very least, fired at the Presidential motorcade.  It was during the time where the doctors at , in particular Drs. Malcolm Perry and Kemp Clark, both of whom worked on President Kennedy, spoke at a press conference, just over an hour after they pronounced him. 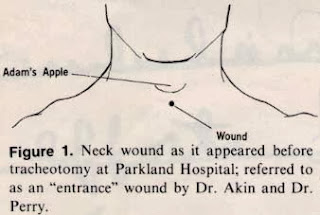 Dr. Perry stated not once but three times that that he considered the wound in Kennedy’s throat to be one of entrance, not exit. Dr Perry, who was experienced in interpreting bullet wounds, had inspected the wound before he performed a tracheotomy on the president. A shot in the throat from the front would, of course, both invalidate the single-bullet theory and, when combined with certain uncontroversial items of evidence, prove that at least two gunmen took part in the assassination.

The evidence contained in the press conference was willfully ignored by the Warren Commission, which made only a token effort to locate a recording or transcript of the conference. Because it had been widely reported in the media that Dr Perry had made remarks unhelpful to the Commission’s preconceived conclusion, Arlen Specter, the future Senator from the state of , and one of the Commission’s leading attorneys, worked hard to get Perry to renounce his initial opinion about the throat wound. Why would he do that?  Unfortunately, we’ll never know.

In the absence of a corrective record, Perry agreed with Specter that the news reports were inaccurate and that he had not made the remarks attributed to him.  Now why Dr. Perry had changed his mind on what he saw is a mystery as are the less than thorough efforts of the Warren Commission and the Secret Service in not managing to track down a recording or transcript of the press conference. The typed transcript had been sitting in the White House press office shortly after the assassination since both Drs. Perry and Clark were joined at their press conference by Wayne Hawks, a member of the White House staff.  It was as if the Warren Commission simply willed Dr. Perry's initial opinion invalid and deleted (hopefully?) from the minds of the public. 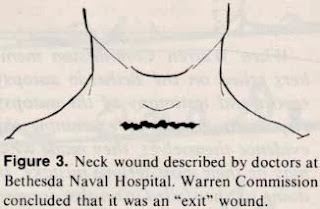 When the President’s body was flown to Bethesda and examined by Naval Physicians, the small bullet hole in the front of the President’s throat suddenly became a wide gaping, lacerated wound; a wound that is generally referred to as an exit wound.  Because of that observation, over time it was suggested that the body of the President was altered in some way.  Again I go back to what the Doctors in originally stated when they said that the wound they saw was an entry wound in the President’s throat.  It was only AFTER they were spoken to by Arlen Specter that Doctor Perry recanted his statement.

This past week marked the 50th anniversary of President Kennedy’s death.  I doubt we will ever know the full truth of what happened that day in nor will we ever be fully satisfied being told by those in power that the official account is the whole truth and nothing but the truth.  While most conspiracy theorist's focus on the peripheries of this case, I’ve always believed that the key that would have opened the door of truth in this case was the body of the slain President himself.

The chaos that embroiled that day can only be accepted as explanation for so much. At some point you have to ask yourself why trained trauma doctors initially said the wound to the President’s throat was an entrance wound only later to recount that when pressured by an attorney for the Warren Commission.  At some point you have to wonder why it is that President Johnson insisted that the autopsy be performed at , where the physicians were naval officers, officers who are sworn to follow orders.

At some point you have to ask yourself with everything we’ve experienced recently, from the realization that the NSA spies boldly and blatantly on American’s in every way imaginable to the lies told about the tragedy in Benghazi, are we really going to continue the ignorant notion that we are by and large, told the truth by those in power?  Are we going to continue to be this incredibly naïve?  The only reason those in power continue to act this brazen is precisely because of our collective naiveté.

So we can continue to ridicule those who are skeptical.  Nobody want’s to be associated with “those” people, right?  When you break it down isn’t that what it’s all about anyway, peer pressure?  The psychological reasoning given to those who believe a conspiracy exists here is because it's almost impossible for those to accept that a lone, deranged soul could change the course of history.  True, it is difficult to imagine that a person could buy a mail order rifle for $13.95 and kill the President of the United States.  Sure it's safer and easier to lay blame at one nut and be done with it.  We have to heal, no?  Well, that's what we're always told.  Move on, move on, nothing to see here.  What did Hillary Clinton say during her Benghazi testimony when pressed as to who was responsible for the attack and death of Ambassador Stevens..."At this point...what difference does it make?"  The difference is the truth matters.


Just keep in mind, with each anniversary of the assassination, the focus is always on who was the shooter - if it wasn't Oswald - and where did he shoot from?  It's become a parlor game at this point with every imaginable explanation muddying the waters.  Don’t get me wrong, I don't believe that there’s a conspiracy around every corner.  Sometimes horrible things happen, often without the need of some nefarious machination being responsible.   At the same time I wouldn’t pretend that we’re always told the truth.  That would be expecting too much out of those in power and I'm not that naive - at least not anymore.  Neither should you.

Posted by The Spector Sector at 9:42 PM