Tony Gwynn - The Passing of a Legend


One of my most cherished memories I have of my dad was how his influence helped form my love for the game of Baseball.  There was one day in particular when we went to purchase my very own, “professional” baseball glove.  This wasn’t going to be a cheap, garden variety type you would get at Kmart, this was the big leagues son, and this was going to be a Rawlings.

For fathers and sons, buying your first glove, is as important as any rite of passage.  Dad didn’t care for other gloves out there other than Rawlings.  Like he always told me, “They hand out the Gold Gloves, why would you want something else?” I was using his rare, left-handed, Rawlings “Clete Boyer” model and it was starting to show its age.  The leather was dried out and cracking and since being left handed, I was preordained for either a first baseman’s mitt or an outfielder’s glove. It was pretty clear what I’d be getting that day.

Dad took me to the Rawlings store – yes they had a sporting goods store – and the minute we walked in we could smell the aroma of the leather.  They were expensive as all hell even back then. We were far from rich so to get this gift was something I knew neither of us would ever forget and I would be forever grateful for.  Even though I was a kid, I knew this had much more meaning than simply replacing my (his) old beat up glove.

Of course I went straight for the catcher’s mitt – I took a shot, what can I say? Dad smiled but had to remind me that being left handed meant you either played first, the outfield or pitched.  The “fun” positions were a no-go for the both of us.  We kept looking until he saw a special section of gloves called signature series.  Of course the majority of them were all right handed except for one in particular. 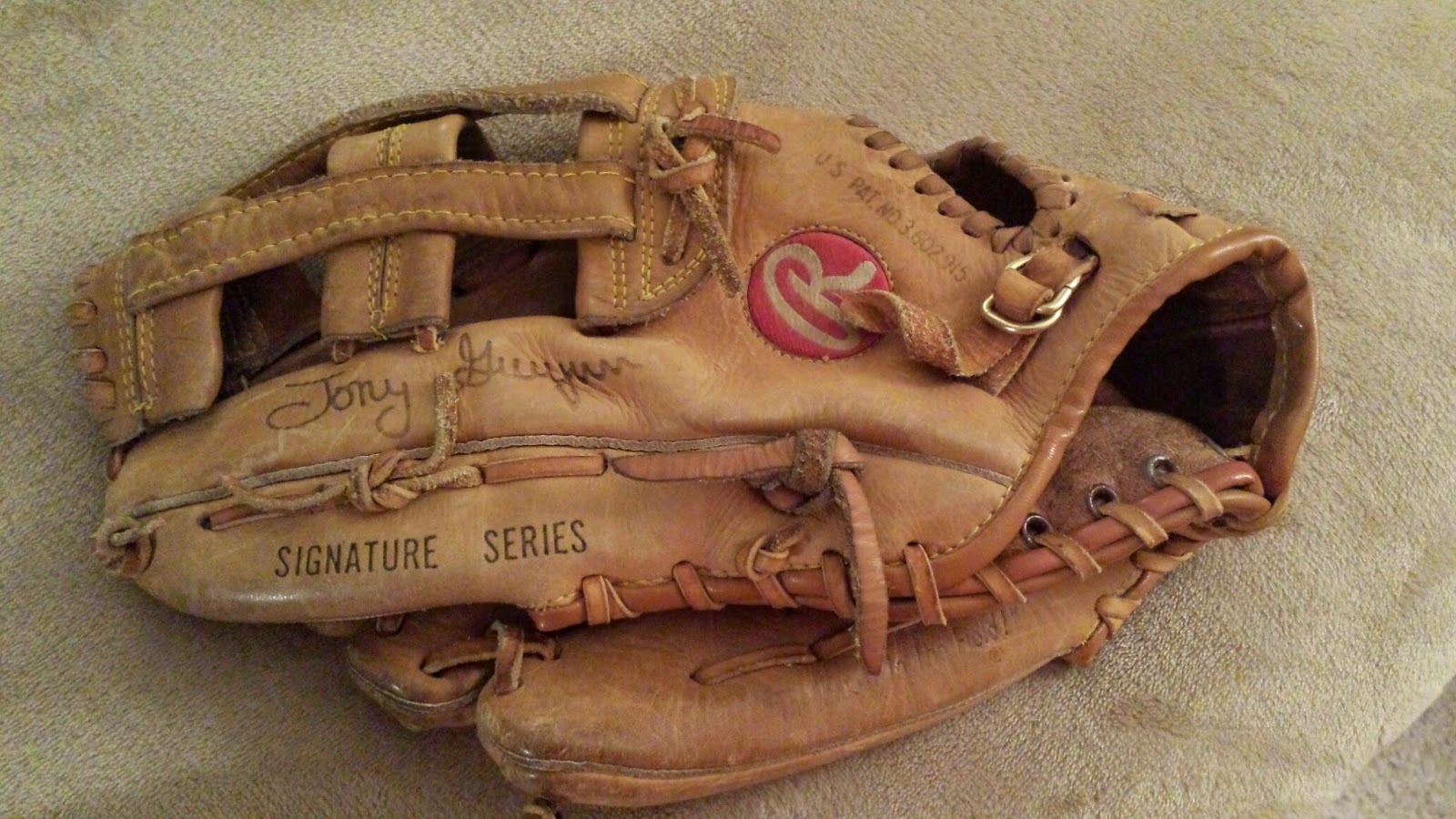 The glove was signed along the thumb and read “Tony Gwynn”.  Mind you this was the beginning of the1984 season, so I had no clue who Tony Gwynn was at the time.  Even my dad couldn’t imagine what an incredible player and career Gwynn would have but he knew he was a stud in the making.  It’s amazing when you look back to moments in your life that leave indelible memories.  Tony Gwynn did that for me.

When I heard that Tony Gwynn passed away from a long battle with Cancer yesterday, I felt a part of my childhood had died as well.  He was only 54 years old, only 4 years older then when my dad passed away.  Both were far too young to go.  Gwynn was as close to being a pure hitter that there ever was.  Mentioning him, you could easily bring up the names of Cobb, Speaker, or Williams and not feel as if you’re out of touch.  Gwynn was that good.

His downfall, and it would wrong not to mention, was his self-admitted demon, chewing tobacco.  In 2010, he was diagnosed with Cancer of the salivary gland.  He was never the same after that original diagnosis.  I want to remember Tony Gwynn for the person and player he was and the role – no matter how minute – he played in my lifelong love affair with the game.  I’ll never forget the memories he was indirectly a part of.  My one hope and if I were a betting man, I bet it would have also been Tony’s hope, is that for Major League Baseball and the Players Union to do the right thing and finally ban chewing tobacco in any Major League stadium. 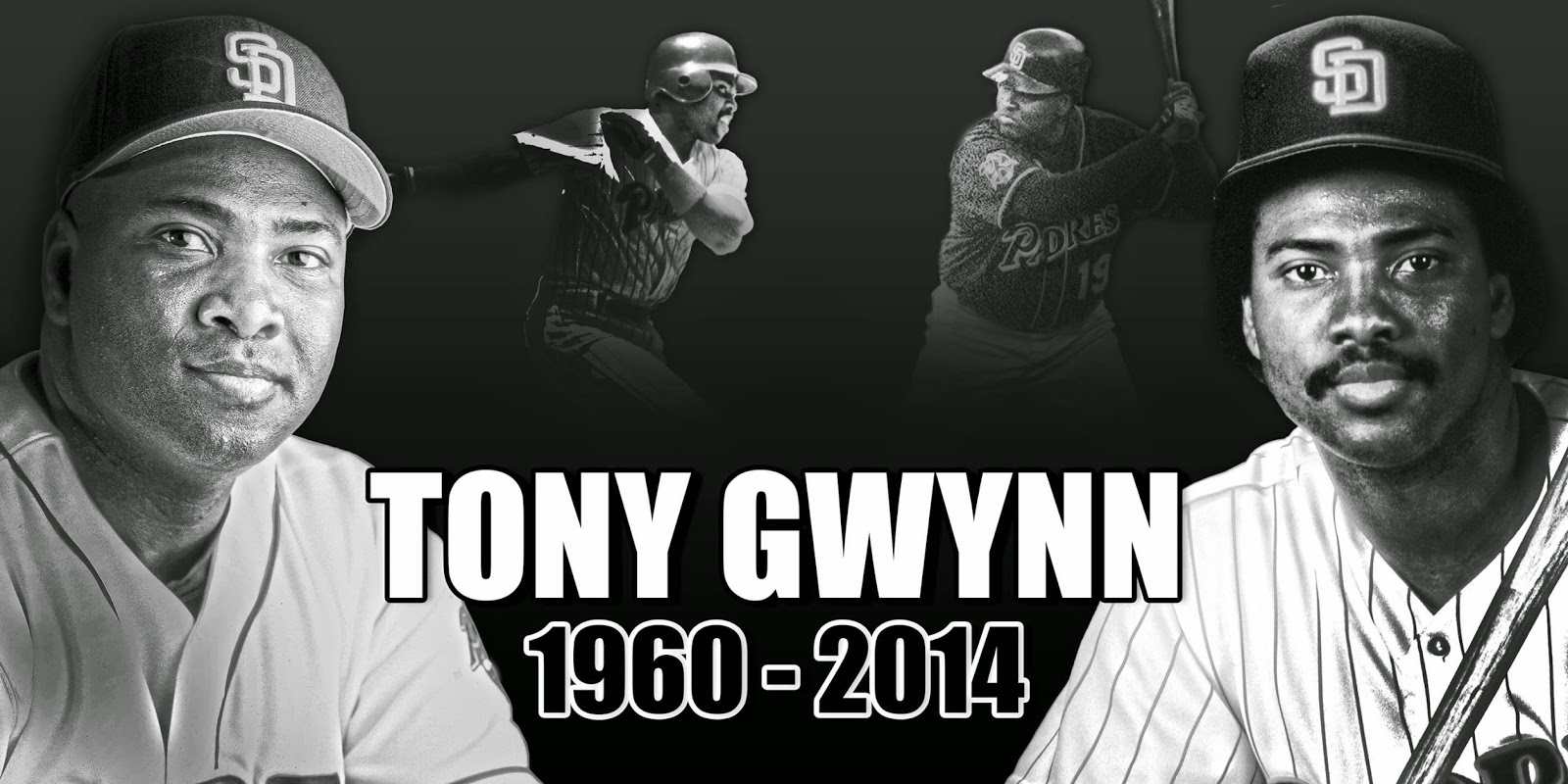 Posted by The Spector Sector at 7:02 PM