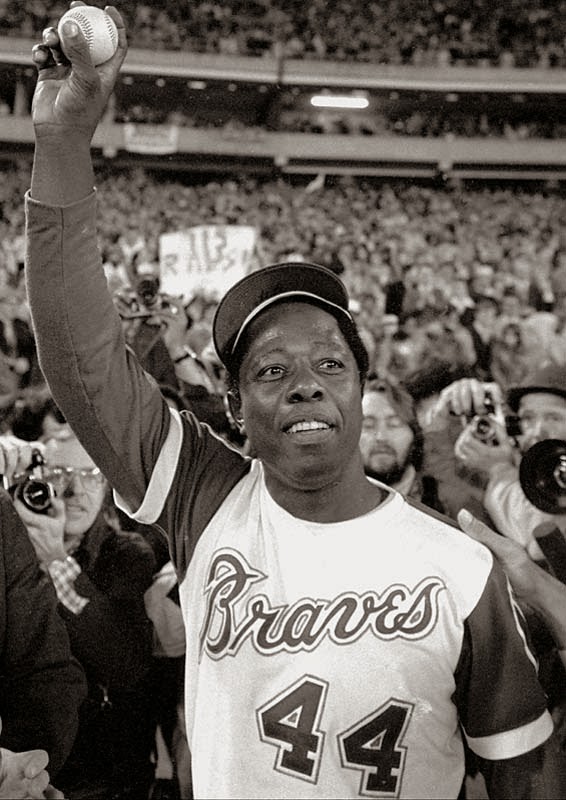 I’ve always made it a point not to take political advice from celebrities, be it of the Hollywood kind or those on the field of sports.  There’s just something wrong about making personal political choices based on what Tom Cruise or LeBron James has to say.  I guess I’ve always been a marketer’s nightmare in that regard.  But when a sports icon and hero, no less, says that those who disagree with President Obama are comparable to the KKK, I take offense and I’m not even a Republican.

Aaron was interviewed for the 40th anniversary of his record setting 715th homerun when he decided to compare the political climate 40 years ago and what he dealt with to today’s political climate and how it’s impacted the President.  Somehow he’s decided that the reason the President is failing – with 51% disapproving of his job performance according to Gallup – is because of rampant racism especially from Republicans.

"Sure, this country has a black president but when you look at a black president, President Obama is left with his foot stuck in the mud from all of the Republicans with the way he's treated. - Hank Aaron


Aaron continued: “The bigger difference is that back then they had hoods. Now they have neckties and starched shirts.”


So it's not the President's fault it's everyone who doesn't agree with the President who's at fault for his falling numbers?  That's like saying a hitter batting a buck fifty isn't at fault for stinking it up, it's the fans who are complaining about it.  Last time I checked we lived in a Democracy where we didn't have to agree with everything our leaders say.  Nor should anyone be branded a racist for not agreeing with him.  But that seems to be the way it is today.  Attack those who disagree with the president as being racist bumpkin boobs - because their arguments are as thin as their bloodline.

I revere what Hank Aaron accomplished and earned in the game.  Hell I applaud him when he''s referred to as the true home run king and not Barry Bonds.  If Bonds were white would my decision be based on the assumption that I hated white people?  I'm not trying to beat up on Aaron but I'm sick of hearing this type of stupidity and the media not calling people out on it.  If you're in the spotlight and you make a statement like that, be prepared to defend it.

We're now six years into the Obama Presidency and  people are still accused of racism when they disagree with him.  Even Hillary Clinton during her primary run against him was accused of such.  Crying racism every time someone disagrees with the president does nothing but give cover to those who are truly racist.  For example, former KKK member and former Democratic Senator from the state of West Virginia, Robert Byrd.  Oh but I suppose he found religion and poof, away went those racist beliefs.

I would never deny or denigrate anything Hank Aaron experienced during his life.  I'm well aware that people can be immeasurably good and evil to one another with the latter making their shallow choice based on skin color or the sexual orientation or the religion of their target.  But to paint people with a broad brush as being racist simply because they disagree with the person, delegitimizes not just the true racists but makes the accuser nothing more than a pawn.

Posted by The Spector Sector at 10:30 AM