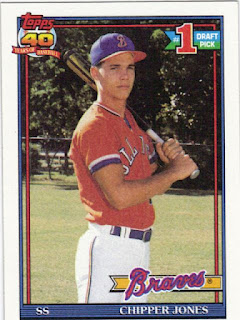 I’m old enough to recall when Chipper Jones was considered the Bryce Harper of his day. I remember seeing him on the cover of his first Beckett, an action shot of Jones turning a double play- he was a shortstop back then. Like most players from 1985 on, I had a cornucopia of his rookie cards. He was as hot of a commodity as a share of Google stock right before it went public. At the time I lived in Orlando, Florida and we didn’t have access to WWOR, the then flagship television station of the New York Mets. Satellite TV was somewhat in its infancy, not that we could have ever afforded such a luxury back then or the inclination to make the backyard look like the Arecibo listening post in Puerto Rico.

So I was essentially a Met fan living in the south and the only television channel that showed baseball was TBS, home of the Atlanta Braves. That might explain why I didn’t get deep into baseball again until around 1985. Sure we watched the Mets as they ventured to Fulton County stadium to take on Dale Murphy but it just wasn’t the same. The Braves were just plain horrible to watch. From the muted bluish hue of their uniforms to the laughable lack of talent on the field, we really watched just to see the opposing team. Of course as years went on, the Mets became synonymous not just as the team in New York but the nation; in spite of the annoying moniker the Braves self anointed themselves with as “America’s Team”.

But I admit as time went on, and as we were still without a way to follow the Mets, I did learn to appreciate what good baseball was, especially good pitching. As a Baseball fan I found myself fortunate enough to have seen the likes of Tom Glavine and John Smoltz in their early years before they earned their eventual places in Cooperstown. I remember my father telling me that Glavine would be a star one-day even though he was absolutely terrible at first. As the years progressed the Braves were finally piecing together a team that would eventually earn their franchise 14 consecutive division titles and my personal ire as a Met fan. When one of those pieces came along - one Larry Wayne “Chipper” Jones Jr. – I realized that as a Met fan, with a team that was in the midst of the Jeff Torborg era…that we were in trouble.

While the Mets seemed obsessed with winning the back pages of the New York Post and the Daily News during that time, the Atlanta Braves were biding theirs, and collecting minor league talent along the way. Chipper Jones to any Met fan old enough to know is what Kryptonite is to Superman; as if we could actually try to compare the Mets of the late nineties to the iconic superhero. Over the span of his career Jones has hit 48 home runs off Met pitching and has driven in 154 runs. It’s the kind of domination that the eventual Hall-of-Famer will forever be remembered in Met history, for better or worse as it seems the team has decided to “acknowledge” his career sometime during the 2012 season, which is going to be Chipper Jones’ last.

Look I get it. As a fan of the game, Jones is one of the greatest and deserves to be inducted one day into the Hall. As a Met fan, who has also witnessed his rise from phenom to Met-sassin, I prefer the team not take part in some elaborate, on-field ceremony to honor a guy who routinely beat the ever-loving crap out of this team. Do I blame HIM for the way the Mets were run as a franchise during Chipper’s rise, absolutely not. In many ways I look at Jones and the success the Braves have had and realize that if the Mets had the proper leadership in the front office and an ownership that wasn’t hell bent on trying to keep up with the headline grabbing Yankees, then Met fans would be the ones doing the gloating right now with one of their homegrown, retiring stars being honored by the Atlanta Braves. But things didn’t pan out quite that way at least not during that span of Met history.

I don’t hate Chipper Jones as some fans are probably going to affirm with blind affinity to the Mets. I just don’t think it’s proper for the Mets to honor him other than with a quick montage, BETWEEN INNINGS, during a game at Citifield. For a team that has yet to retire Gary Carter’s or Keith Hernandez’ or even Mike Piazza’s number, it’s inexcusable to give Chipper Jones anything other than an acknowledgment. But lets face it; this is the same team that took three years to get Citifield finally up to standards. Everything from the overemphasis on the Brooklyn Dodgers (Jackie Robinson specifically) to the lack of an area that honored the METS team history (now represented by the Mets Hall Of Fame in the lower concourse). These were major oversights that fans have been very vocal about over the last three years, and rightfully so. I just hope the organization does the right thing here. Charity isn’t the only thing that begins at home. So does showing respect for your family first.
Posted by The Spector Sector at 5:33 PM