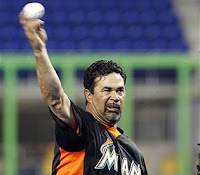 You can file this article under the “it was bound to happen” category. Seems as if Ozzie Guillen, the new Miami Marlins manager, once again has contracted foot-in-mouth disease when he was quoted saying this about the Cuban dictator Fidel Castro:

“I respect Fidel Castro. You know why? A lot of people have wanted to kill Fidel Castro for the last 60 years, but that (expletive) is still here.”

Aye dios mio Ozzie. You sure didn’t waste any time did you? I always thought the inane things that Guillen would say were a well-designed ruse; intellectual bait to get reporters or fans off his player’s backs especially when things weren't going so well. But I’m starting to believe that perhaps I’ve given him way too much credit intellectually.

His recent linguistic faux-pas has had some people calling for some kind of disciplinary action to be levied against him. Guillen has already apologized for what he said but there will be a press conference tomorrow so he can once again show just how contrite of a clown he really is. And here you thought that monstrosity of a sculpture the Marlins have erected in centerfield in their sideshow of a stadium would be the only thing to cause seizures.

If loose lips sank ships then Guillen would be the captain of the Titanic, the Exxon Valdez and the Concordia. Ozzie can you do us all a favor and shut up please? Or at least wait until your tropical skittled uniformed, overpaid and overhyped team is barely doggie paddling over the .500 mark before you go off script. As much as I think what you said and what TOWN you said it in, deserves if anything, a trip to get a head CT scan, I’m not sure if you should be punished. I think you’ve done enough to yourself already.

Posted by The Spector Sector at 10:40 PM