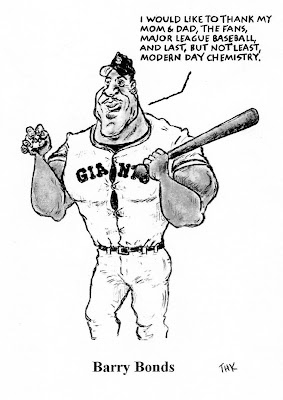 As I was driving home the other night, I was listening to Casey Stern and Jim Bowden on the MLB Network Radio channel on XM.  They were discussing with Jill Painter, the L.A. Daily News sports columnist, the Baseball Hall of Fame vote which took place Wednesday.  This is the same Jill Painter, member of the Baseball Writers Association of America who thought it made perfect sense to cast one of her Hall of Fame votes for the former Blue Jay, Dodger, Diamondback and Met, Shawn Green.  As she was engaging in verbal kabuki, explaining her vote, I could almost feel the indignation boiling over from the two hosts.  Big kudos goes out to both Bowden and Stern for having the combined patience of a saint.  That interview alone should earn them a few Marconi votes in my view.

It’s a good thing I don’t do radio; I wouldn’t have been nearly as diplomatic as they were.  As if there wasn’t enough preordained controversy with this year’s crop of candidates, we get this nonsense and I’m not even going to enrage you with her supposed rationale.  I have too much respect for you to even try.  It’s almost as bad as the one vote that someone gave Aaron Sele.  Again, not going to enrage you with the facts, you can look up Sele’s pathetic career statistics here if you wish.  Then you have my permission to curse uncontrollably - - and yes you can practice reading that line in your best Bane voice.  Or Darrell Hammond’s Sean Connery as I believe they’re one in the same.

Call me naïve but I was always under the impression that those having been afforded the privilege of a Hall of Fame vote would show just a modicum of respect towards it.   I’m not the only one who thinks this way as does the great Metstradamus.  But this is unfortunately the year that common sense, fairness and respect for the game clearly went over the edge of the train tracks faster than a New York City subway commuter.  Ouch.

Now I’ve been very sympathetic to the plight the writers have when it comes to wading through the waters that PED’s have polluted in Major League Baseball.  But like Metstradamus, when voters use their privilege to make some grand statement (i.e. voting no one in), peppered with some who find it – I don’t know – comical, to vote for the likes of Sele and Green, it simply demonstrates to me that stupidity isn’t determined by who you write for or what and if you get paid for writing it.

When the likes of Marty Noble, someone I’ve always had tremendous respect for, thinks that because Mike Piazza had an abundance of—wait for it—back hair, during his time as a Dodger and decides to connect the follicles and assume that it meant Piazza used.  It shows me just how far we’ve fallen as a people more than anything.  We’ll believe the very worst of each other just to protect our own vanity because God forbid a player is later found to have juiced.

We can’t have writers dealing with pangs of remorse now can we?  To top it off, Noble then ironically said that as a Met, Piazza had a hairless back, which is ALSO a symptom of steroid use.  So if Piazza essentially played with Robin William’s back he’s using yet if he’s smoother than an Abercrombie model he’s also using?  Absolutely pathetic, especially that never, not once, has Piazza been accused or named in any report or tested positive for any performance enhancing drugs.

I always believed that MLB needs to be far more proactive of a guide for the BBWAA when it comes to Hall of Fame voting and steroids.  I wrote a piece for Metsmerized in early 2011 calling for Bud Selig to commission a panel exploring the effects that PED’s have on actual playing performance.  Of course Selig and MLB want absolutely nothing further to do with this issue—at least not what happened in the past.  One bright spot happened a few days ago when the MLB Players Association and MLB agreed to year round drug testing for Human Growth Hormone and Testosterone.

The BBWAA and their writers refused to vote for some players and based it on innuendo and unproven allegations; and that is shameful itself.  In part I can understand their fear of enshrining someone who later is proven to have used PED’s as players elected cannot be removed from the Hall of Fame.  My question is why is that?  Hypothetically if a Hall of Famer does something illegal, whether during or after their playing career, why are they not immediately open to removal?  That, in my opinion, would allow the writers to choose players based on their careers and not on speculation.

George Orwell was quoted as saying:

“Saints should always be judged guilty until they are proved innocent.”

Now the real question remains, who was Orwell talking about; the players or the writers?

Posted by The Spector Sector at 2:52 PM