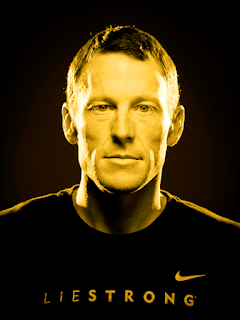 Apparently there is no lack of public humiliation encompassing the sports world these days.  Everything from the fake dead cyber-girlfriend of Notre Dame’s Manti Te’o to the recent MLB Hall of Fame vote which resulted in zero inductees, the first time that’s happened since 1996 and only the 8th time ever, thanks mostly to the stigma left in the wake of the PED era.  Now we have former cycling champion Lance Armstrong doing the latest PED mea culpa in an interview with that hard hitting, take-no-prisoners journalist, the Edward R. Murrow of our day, Oprah Winfrey.

Doing the proverbial interview with Oprah has become the staple of many a celeb looking to rehabilitate their often times self-destroyed public image.  She’s basically the female Larry King minus the goofy suspenders; never really trying to pry the total truth out of their guests as much as wanting to be “the first” to air whatever the celebrity has to say – all of which has been vetted by their public relations handlers of course.  I call it milktoast Entertainment Tonight journalism as it’s all about the fluff and little about the substance.

For many years Armstrong was accused of taking PED’s and always vehemently denied it both in the public arena and even during depositions while under oath – which could ultimately be his real undoing.  Armstrong won a record breaking 7 consecutive Tour De France titles from 1999 to 2005.  It amazes me how these celebrity/sports types have this complete disconnect with reality and believe that they can sustain charades like these indefinitely.  In Armstrong’s case, I’m not even that upset over the fact that he used PED’s – I’ve become numb regarding PED use and athletes at this point.

It’s that Armstrong used his celebrity as a bludgeon to destroy the lives of friends, colleagues and business partners and anyone else who came along and questioned his veracity.  Armstrong was no better than a typical mafia thug.  But this mafioso was perfectly created, born from a media cauldron and clothed in cloak of infallibility – yellow bracelets included.  Those yellow bracelets that everyone from politicians to movie stars to school teachers wore happened to be all the rage a few years ago were the creation of Armstrong’s Cancer research foundation, Livestrong and were designed as a way to accumulate donations for cancer research.

Even the name -- Livestrong -- has an air of invincibility to it and along with the people whose lives Armstrong’s destroyed, it’s the real damage that he’s done to the honest and good work of Livestrong that will test that invincibility over time.  This was from an article on Yahoo Sports by Dan Wetzel and it’s so spot on I had to give him a hat tip.  He has 9 questions that he hopes Oprah will ask:

1. Why now, Lance? Is it because in one potential perjury case the statute of limitations has passed? Is it because you've already lost almost all your sponsors, had to step back from your foundation and are no longer getting the attention you once earned?
Did you have to lose nearly everything until you sought the only possible out? And at this point, why are you worth listening to at all?

2. Why are you doing this with me, Oprah Winfrey? I'm not known for my cycling knowledge or for pointed follow-up questions or my investigative journalistic skills. In fact, it's the opposite.

Wouldn't sitting down with Scott Pelley at "60 Minutes" have been a more legitimate forum? How about the Sunday Times of London, which you sued for libel for printing the truth? Or any of the French or American media that you bashed all along when in fact they weren't wrong at all?

You always fashioned yourself as a tough guy, Lance. You beat cancer for crying out loud, why go soft now?

3. Let's talk Betsy Andreu, the wife of one your former teammates, Frankie. Both Andreus testified under oath that they were in a hospital room in 1996 when you admitted to a doctor to using EPO, HGH and steroids. You responded by calling them "vindictive, bitter, vengeful and jealous." And that's the stuff we can say on TV.

Would you now label them as "honest"?
And what would you say directly to Betsy, who dealt with a voicemail from one of your henchmen that included, she's testified, this:

"I hope somebody breaks a baseball bat over your head. I also hope that one day you have adversity in your life and you have some type of tragedy that will … definitely make an impact on you."

When you heard about that voicemail, why didn't you call Betsy and apologize then?

You can read the 6 other questions that Wetzel would like Oprah to ask Armstrong here.  The questions have the reader feeling exactly what it would be like looking up at a predator drone strike right before a hellfire missle is launched.

Look I’m not some holier than thou righteous preacher here trying to cast Armstrong and the rest of the PED users off onto some sort of moralistic island where they are mandated to do penance and compete in weird games of skill against Jeff Kent.  In fact when it comes to PED use I’m more upset on how we, the public treat these fools after we discover their indiscretions.  Instead of shunning them we find them fascinating.  Hell even Melky Cabrera who was suspended by MLB last year for 50 games because he tested positive for PED’s, was signed by the Toronto Blue Jays as a free agent to a 2 year $16 million dollar contract mere months after getting caught.

I take back anything and everything I’ve said about Armstrong or any of these guys, they’re geniuses.  We’re the dopes.
Posted by The Spector Sector at 7:50 PM