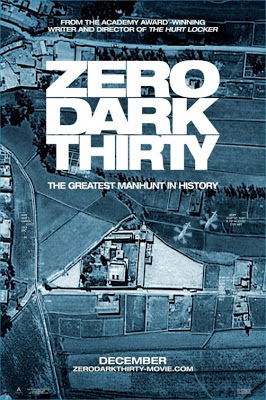 Last last year the National Geographic Channel aired a docu-drama based on the Navy Seal raid that killed the Al-Qaeda terrorist leader and mastermind of the September 11th attacks, Osama bin Laden.  The film was told from the perspective of the soldiers who initiated the raid, Seal Team Six.  It aired just two days before the Presidential election and was produced by Harvey Weinstein, a major supporter of the President’s.  Naturally it created a furor as some assumed it would be a late-inning puff piece intended to influence undecided voters towards the President.  Well, needless to say, it’s doubtful that the docu-drama did anything to sway voters in any direction, even though it did accentuate the President’s leadership.

Two months later, the big budget version depicting the raid in Zero Dark Thirty has hit theaters.  Kathryn Bigelow and Mark Boal, the director and writer of The Hurt Locker, take on bin Laden and the mythos encompassing the CIA, two Presidencies and the military – and may have scored another critical hit.  The big difference between ZDT and its Nat Geo little brother is that Bigelow focuses all her attention on the decade-plus long investigation spearheaded at the CIA by Maya, (played by Jessica Chastain who has been nominated for best actress) a young woman who was recruited right out of college who’s only task has been to hunt down the world’s most wanted man.

The film is based on obvious true events and producers were given incredible access to certain information by the Obama administration, however Bigelow had the daunting task of keeping viewers riveted even though the outcome and ending was a given.  By presenting the story to the audience through the eyes of Chastain, Bigelow was able to do what all great filmmakers are able to do—she created a film that made you emotionally invest in the main character.  Early in the film we are shown a scene where Chastain and the CIA field agent Dan (played by Jason Clarke), are in the process of interrogating a man with information on a courier that worked for bin Laden.  What ensues is probably the most controversial part of the film as it portrays “enhanced interrogation” including waterboarding scenes.

Personally I’ve always been on the fence regarding “enhanced interrogations” and much of what the post 9-11 world that President Bush both dealt with and helped to initiate under his watch.  While some tactics are a necessary evil in the end, we do have to remain vigilant in not relishing them (see Abu Gharib).  Regardless your opinion of the man, it’s hard to say that the tactics that he pushed through including the “enhanced interrogations” didn’t provide the intel our clandestine services needed to finally capture bin Laden.  That’s not to say that “enhanced interrogations” alone were the reason he was finally captured – no endeavor of this magnitude can lend its success to one practice.

Is it morally ambiguous not to afford Geneva Convention rights to enemy combatants because they aren’t fighting for a particular sovereign nation?  Perhaps it is.  Then again is waterboarding torture?  Is playing Gwar at 200 decibels around the clock?  These are part of the psychological games the CIA used to weaken the resolve of some detainees.  Some tactics may have played fast and loose constitutionally but one could argue if they weren’t done, would bin Laden have ever been caught? And to Bigelow’s credit, she didn’t try to paint President Obama as some Christ-like deity as compared to his predecessor’s Satan.  The world is a far more complicated place than that and Bigelow is clearly aware of that throughout the film even if some of President Obama’s most strident supporters aren’t. 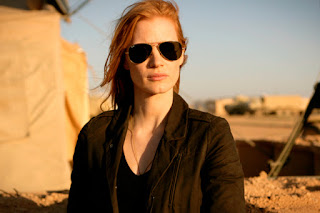 Bigelow takes a very straightforward systematic approach to the hunt for bin Laden in ZDT.  At times it seemed a bit too procedural bordering on banal but given the length of the actual investigation and the stakes that were at risk, I’m sure those involved were anything but banal.  Unfortunately that’s how it translated on film.  Not to mention that much of Maya’s yeoman’s work is treated as commonplace as your typical office employee.  That in itself lends to the view that much of the work done to capture bin Laden was tedious and often times unproductive—prompting her superiors to question her tactics--so Bigelow’s answer to that was to jump ahead a few years into the investigation.

To offset the rigidity of the pace of the film, Bigelow and Boal take advantage of the character of Maya to its fullest.  Shining a light on her solitude as she’s so alone-- consumed by the hunt—Chastain owns this role without question.  Even as she’s consistently beaten down by both her superiors lack of faith in her to struggles in the investigation, it’s her resolve that keeps the audience hooked and if you’ve ever seen the Showtime series Homeland, which is also led by a strong female protagonist, you’ll appreciate Chastain’s character even more as she actually represents someone who does exist—albeit without the neuroses of the character from Homeland.

The best example of her resolve comes when one of her colleagues was blown up by a suicide car bomber at the Camp Chapman base in Afghanistan in 2009, killing 7 CIA agents.  Because Maya was spared, she believes it to be an omen that she’s meant to finish the job.  She tells the Seals at the camp, wary of her and the CIA’s presence, “I’m gonna smoke everybody involved in this op,” speaking about the attack.  “And then I’m gonna kill bin Laden”, prompting a few raised eyebrows from the Seal unit, not accustomed to such steeliness from a CIA field agent.

The supporting cast is stocked.  You have the Deputy Director played by Mark Strong (Green Lantern, Tinker Tailor Soldier Spy) shouting at his agents in a conference room, “I want targets!  Bring me people to kill!  Do your fucking jobs!”  James Gandolfini plays Leon Panetta, the CIA Director (now the outgoing Secretary of Defense) and along with them were Kyle Chandler as Maya’s cautious station chief, Edgar Ramirez as a CIA operative who tracks bin Laden’s courier, and Jennifer Ehle as a fellow veteran CIA agent.  Each one did an amazing job with what they were given. 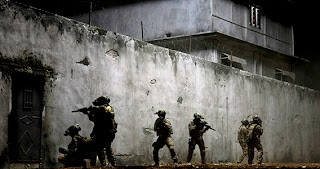 We finally head into the last 45 minutes of the film, introducing Seal Team 6 and the raid itself.  What was a methodical investigative quickly grabs it’s war footing and takes us into what it must have been like to finally achieve one of the greatest battlefield victories in modern history.  The raid itself, while bereft with its own problems (the hard landing of the stealth Blackhawk which later had to be destroyed) changes the viewers point of view, taking on the perspective of the Seal team.  I found it interesting that even though I knew the outcome, I was still riveted and at times unsure of what was to come.  It was ironic because it was that feeling of helplessness that Maya conveyed for the first time in the film, when everything was out of her control.

Zero Dark Thirty will certainly cement itself in cinematic history if anything for its subject matter and what it means to each viewer on a personal level.  Is it flawed? Yes.  Bigelow actually received little help logistically if any as she had zero access to weaponry or aircraft.  Did Kathryn Bigelow use whatever access she was given to fall in suit with 90% of Hollywood and use this film as a political statement, no.   This was neither a film that carried a torch for the President nor one that drove a stake in the heart of his predecessor.  She created a drama akin to an episode of Law and Order but one that transitioned, at the pivotal moment, into the most significant on-screen adaptation of the most important military action of recent time.

In the end, after the Seal team successfully completes the mission, we see an emotionally spent Maya, unsure of what to feel—completely lost in the moment.  She’s given the task of confirming the identity of bin Laden’s corpse—confirming that it was him and confirming for the audience that the long struggle to bring the world’s most wanted man to justice was accomplished.  And Kathryn Bigelow has accomplished an excellent look into history in the process.

The Sector gives Zero Dark Thirty 8 out of 10.
Posted by The Spector Sector at 7:28 PM